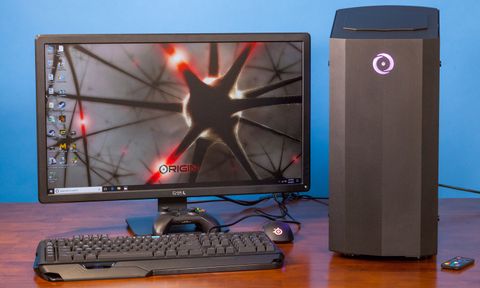 The Origin Millennium (2018) improves on one of the most powerful high-end desktops with a more streamlined, upgrade-friendly design.

How do you improve on one of the best premium gaming desktops around? Make it even sexier. The 2018 Origin Millennium (from $1,736; $4,368 as tested) is a complete design refresh of Origin's long-running premium PC, offering a sleeker and sturdier desktop while still supporting all of the high-end internal components you can dream of. If you're in the market for a boutique, made-to-order PC, and have the cash (and desk space) to go all out on one, the revamped Millennium is an excellent choice.

The new Origin Millennium is the company's most premium-looking desktop yet -- and that's saying a lot. This complete revamp ditches the plastic of previous models for a slick aluminum-and-glass design, featuring  transparent tempered-glass panels that made it easy to stare longingly at the dual GTX 1080 Ti graphics cards and glowing LED RAM packed into our unit.

Our model was fully tricked out with internal RGB lights that you can control with an included remote, which allowed me to add a dizzying light show on top of the PC's already droolworthy internals. I'm a fan of the slick black paint job that adorned our review unit, though you can customize the Millennium with all kinds of crazy paint options (more on that later).

At 25.3 x 24.8 x 9.8 inches, the latest Millennium hasn't exactly gotten smaller compared with the previous model (25 x 21.4 x 9.8 inches), but the new, streamlined design sure makes it look like that's the case. Despite the refined looks, Origin's PC still weighs a hefty 40 pounds, so make sure you set it up somewhere you're not going to want to move it from.

Our model was fully tricked out with internal RGB lights that you can control with an included remote, which allowed me to add a dizzying light show.

The Millennium packs all of your essential plug-and-play ports in a small nook up top, where you'll find two USB 3.0 ports, headphone and mic jacks, a USB-C port and buttons for power, reset and controlling the system's LED lights. Best of all, you can cover them all up with a convenient sliding flap, allowing you to preserve the Millennium's extra-seamless look when you're not gaming.

You'll find manyconnections in the back, including four USB 3.0 ports, three USB 2.0 ports and one USB-C port. The Millennium also packs an Ethernet jack, a full suite of audio ports and a Wi-Fi antenna connection. Each of the Millennium's GTX 1080 Ti graphics cards sports three DisplayPorts and an HDMI port, giving you plenty of options for hooking up multiple displays.

On top of being more attractive, Origin's new Millennium design is more upgradable than ever. Nearly every corner of the machine can be opened up or tinkered with in some way -- and without the need for tools.

I've never seen Destiny 2 look as good as it did on Origin's machine, which allowed me to shoot down aliens in 4K at a steady 60 frames per second.

The system's two magnetic glass side panels open as easy as a refrigerator door, making it easy to access the GPU, cooling system and RAM slots on the left side and the myriad of neatly woven cables on the right. The Millennium's front panel opens just as easily, revealing five hot-swap storage bays that you can outfit with extra drives.

You can even pop open the top of the desktop without any tools, should you need to clean or replace the PC's top-facing fans.

Armed with dual Nvidia GTX 1080 Ti graphics cards, our Millennium proved to be an absolute 4K and VR monster. I've never seen Destiny 2 look as good as it did on Origin's machine, which allowed me to shoot down aliens in 4K at a steady 60 frames per second (fps), and upward of 100 fps at 1440p.

The Millennium made quick work of our typically demanding Rise of the Tomb Raider test (max settings), rendering the game's gorgeous peaks and valleys at 92 fps at 1080p and a highly playable 52 fps at 4K. Our Alienware Area 51 Threadripper (single GTX 1080 Ti) turned in similarly strong performance (96 fps at 1080p, 45 fps at 4K), while both PCs smoked our gaming desktop averages for 1080p (72 fps) and 4K (32 fps).

Origin's desktop did an even better job with the dense open-world action of Grand Theft Auto V, running the game's benchmark (1080p, max settings) at a blistering 142 fps. That tops the Area 51's 111 fps, and eclipses our 81-fps average by a significant margin.

Unsurprisingly, the Millennium maxed out the SteamVR Performance Test with a perfect score of 11, making it ideal for any virtual-reality headset you throw at it. That ties it with the Area 51, and tops our 10.7 average.

The Millennium scored a whopping 13,022 on the 3DMark Fire Strike Ultra benchmark, which gauges 4K gaming capabilities. That more than doubles our 6,088 gaming PC average.

Thanks to its Intel Core i7-8700K processor and 16GB of RAM, the Millennium chewed through any combination of tasks I put it through. I never experienced any slowdown or crashing on Origin's beefy PC, even as I ran Destiny 2 in one window, bounced between five different Twitch streams in another, and opened over a dozen different browser tabs.

Design options include black, gray and red color schemes, though you can splurge for fancier finishes, such as metallic paint ($100 extra), a hydro-dip coating ($375 extra) or a variety of custom themes that start at $524. As far as the two side panels go, you can opt for two tempered-glass panels, two aluminum panels or one of each. You can even add some custom laser etching for an extra $99.

Our $4,368 configuration is a good example of what you can do with the Millennium if you've got  cash to burn. It packs an Intel Core i7-8700K processor, 16GB of RAM, a 500GB SSD with a 3TB hard drive and two Nvidia GTX 1080 Ti graphics cards. That's on top of lifetime 24/7 tech support and labor and a one-year part replacement warranty, which comes standard with every Origin desktop.

The 2018 Origin Millennium makes a great thing even better, retaining the original model's plethora of customization options and smoldering gaming performance and cramming it into a much nicer-looking (and more upgrade-friendly) package.

If you need something smaller and cheaper (but similarly upgradable), the Origin Neuron ($1,153 starting) and Alienware Aurora R7 ($849 starting) are good alternatives. But if you've got the space (and wallet) to splurge on something that you can customize to your heart's content both inside and out, the Millennium is one of the best high-end desktops available now.