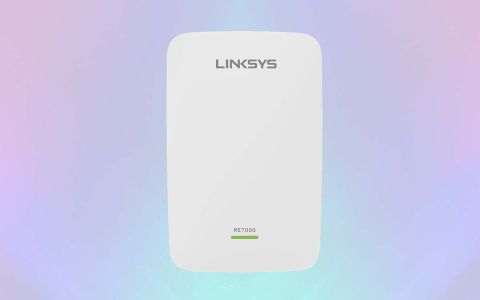 Need to beef up your Wi-Fi network but don't want an extender that stands out? The easy-to-hide Linksys RE7000 Max-Stream AC1900+ Wi-Fi range extender is a great choice when you want to fill dead zones.

Combining a quick and efficient setup routine with reasonable if uninspired performance, the Linksys RE7000 Max-Stream AC1900+ Wi-Fi range extender ($100) uses the latest technology to push Wi-Fi farther into your home. This extender's advantage is that the white device can fill Wi-Fi dead zones without screaming that it's an extender.

With a two-prong plug, the white Max-Stream AC1900+ Wi-Fi range extender (aka, RE7000) plugs right into an AC outlet. At 4.9 x 3.2 x 1.7 inches, it is larger than the Netgear EX6120 AC1200 Essentials Edition Wi-Fi range extender but one-tenth the size of the desktop-oriented Netgear Nighthawk X6S EX8000 tri-band Wi-Fi extender. Because of the Linksys device's relatively compact size, the RE7000 doesn't block adjacent AC outlets.

Without external antennas and with only one LED, Linksys' device is a stealth extender. The light can telegraph the extender's status, but you can forget about individual indicators for power or the extender's individual networks. When the light glows green, the RE7000 is in its sweet spot. If the light is orange, the extender needs to be closer to the router.

The RE7000 also lacks the Netgear X6S' dedicated backhaul channel for moving data between the router and extender. It has the next best thing: Linksys' Cross Band technology, which continually apportions the data between the 2.4GHz and 5GHz bands. The RE7000 is rated at AC1900.

In my older home, the RE7000 had a range of 70 feet and delivered 84 Mbps of throughput to my porch for watching 4K movies and listening to music on my iPad Pro while grilling burgers 50 feet away. Even though its case is riddled with cooling vents, the extender got to as hot as 110 degrees Fahrenheit. It used 4.1watts of power.

With the one-two punch of beam-forming and MU-MIMO technologies, the RE7000 should satisfy a home full of digital junkies. Linksys says that the extender is good for 10,000 square feet of coverage.

The RE7000's four internal antennas divide the data flow of the 2.4GHz and 5GHz traffic but can't be aimed or replaced. The extender has a Gigabit Ethernet port on the bottom but lacks a USB port for adding a printer or hard drive to the network.

In addition to a recessed reset button, the device's switches include a WPS button for quickly connecting clients or a router. There isn't even a power switch; you just plug the device in for power and unplug it to turn it off.

Unlike some of the other extenders we've reviewed, Linksys' RE7000 cuts to the chase and lets you set it up where you think it should go. (That said, you run the risk of the setup process taking longer if you choose a bad initial location.) While you can use the WPS setup process, I used a web browser, which took about 7 minutes.

After plugging the RE7000 in, I used my iPad Pro to connect to the Linksys Extender Setup 00D network (the three characters come from the unit's Mac address). Next, I typed "extender.linksys.com" into a browser window and chose to use the device as an extender, not an access point.

The extender scanned and found my Wi-Fi networks. Then, I selected the ones to extend and entered the pass codes for the new networks. At the end of this process, the RE7000 showed me a crude map of the placement of the router and extender, confirming that the device was well-placed. The extender also confirmed this with its glowing green LED, which assured me that the RE7000 was running at peak efficiency.

While it works with recent routers, the RE700 has a trick up its sleeve for the company's Max-Stream EA7500 through EA9300 routers. So long as the extender is within range and matches the router's network names, pass codes, channel width and security mode, the devices should automatically connect and offer seamless roaming.

I used the browser connection to sneak a peek inside the device, accessing simple and practical screens for changing the network name or pass code, prioritizing users, and limiting access to the network. It even has a crude but effective site-survey tool for optimizing the extender's location. The Linksys app, compatible with both Android and iOS, also allowed me to see who was connected and apportion the bandwidth among them.

Linksys stands by the RE7000 with 24/7 phone support and a one-year warranty. While that's not as generous as the two years of coverage that TP-Link provides for the RE650, Linksys' offering is ahead of Netgears' 90 days of included support.

On the Linksys site, there are lots of helpful resources, like videos, FAQs and troubleshooting tips for setting up and optimizing the RE7000. These range from descriptions of the hardware to firmware and troubleshooting help. A manual is available for download.

This may not be the fastest extender, but you won't have to hide the Linksys RE7000 Max-Stream AC1900+ Wi-Fi range extender. It runs hot, but it's tiny compared to the Netgear Nighthawk X6S EX8000 and it does a good job of blending in with its surroundings. The $100 extender can put Wi-Fi where it needs to be.