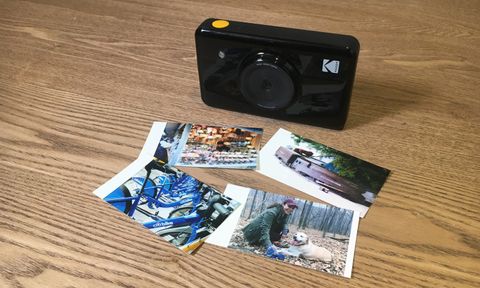 This instant camera/Bluetooth printer disappoints at both its tasks.

Instant cameras are fun, retro-style toys, and portable photo printers are great for people who want to physically share images they just took with their smartphones. The Kodak Mini Shot is a fantastic idea, as it combines both of those ideas into one device: Not only can you take photos with this $99 camera, but you can also connect to it via Bluetooth from your smartphone and use it to print out photos. It's too bad that this camera doesn't perform either function well.

The rectangular Mini Shot comes in black, white, or yellow and white; the latter is much more fun and is reminiscent of Kodak's trademark colors. On top is a power button next to a larger shutter button; the rear has a 1.7-inch LCD, and a five-button pad on the back lets you select photos, print them and more. Along the left side is a slot for the printed photos, and the right side has a micro USB port for recharging the built-in battery.

The bottom of the camera pops out when it's time to replace the printer cartridge, but there's no way of knowing how many shots you have left. This was really annoying after I took a photo and tried to print it out, only to discover there was no paper left in the camera.

Unlike the Kodak Printomatic, which has a microSD card slot and saves a digital copy of your photos, the Mini Shot has no storage. So there's no way to save your photos, except to print them immediately.

The resolution of its small, 1.7-inch display was so low that it was hard to tell if anything was in focus.

I don't expect a $99 camera to perform as well as a DSLR, but some things could stand improvement on the Mini Shot. The resolution of its small, 1.7-inch display was so low that it was hard to tell if anything was in focus. Additionally, it takes a long time for the screen to refresh when you move the camera around or if the subject is moving.

You can take one or two photos after a low-battery warning appears on screen, but after that, you have to recharge the camera before you can make another print.

While the Printomatic uses Zink paper, the Mini Shot has an actual mini-printer inside. This resulted in more-saturated prints than the Printomatic produced, but the Kodak camera had trouble in all sorts of lighting conditions.

Both outdoors and indoors, the Mini Shot failed to adequately compensate scenes that had a wide dynamic range (areas with a lot of brightness and dark areas). Brighter areas tended to get washed out.

For example, the foreground of an indoor photo of a train set was completely white, and while the train itself was properly exposed, it was blurry — no doubt a result of the camera slowing its shutter speed. However, enabling the camera's flash merely resulted in a photo that was even more washed out.

With the Mini Shot, you have to wait for the printing process to finish before you can take additional photos.

Printing is anything less than instant. The 2.1 x 3.4-inch paper goes in and out of the camera four times, one time for each color (cyan, magenta, yellow) and a final time for a finish laminate. In all, you have to wait about 30 seconds.

That's roughly the same time as you would have to wait for Zink or Polaroid to fully develop. But with those cameras, at least you can take additional photos during that time. With the Mini Shot, you have to wait for the printing process to finish.

A replacement cartridge with 20 sheets of paper costs $14.99, which is about twice as expensive as similar-size Zink paper, but slightly less expensive than Fujifilm Instax photo paper.

The Mini Shot can also double as a Bluetooth printer; using the Mini Shot app (for Android and iOS), you can connect your phone wirelessly to the camera and print out photos taken with your smartphone.

On this app, you can adjust settings such as brightness, contrast and saturation; add text and stickers; apply Instagram-like filters; and use templates, such as Christmas and Birthday, to add a thematic element.

This is a fun feature, but don't expect the highest quality. A photo I took of one of my cats sleeping by a fire looked a bit dingy. An outdoor shot of my wife and our dog came out better, but slightly faded.