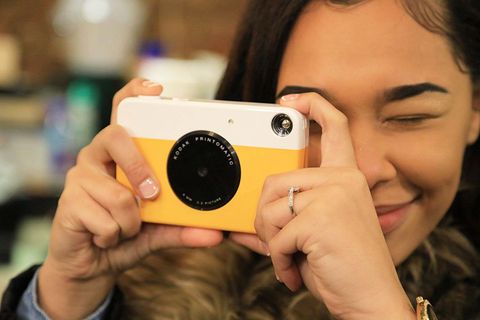 The Kodak Printomatic camera produces both digital and physical photos, but the results for both are merely average.

Retro-style instant-film cameras are trending, but it's a little hard to share a printed photo on Facebook. The Kodak Printomatic ($69) lets you have it both ways, as it not only prints out a Zink photo, but also saves a digital copy. I'’s easy to use and inexpensive. If only its prints were better.

The Printomatic is decked out in Kodak's trademark yellow and white, with a large black circle on the front where the lens is located. (The camera also comes in gray and white, but where's the fun in that?)

The top of the Printomatic has a white shutter button, with a small slider button to the left that lets you switch from color to black-and-white photos. The bottom of the camera has a microSD card slot and a micro USB port to recharge the camera's battery.

The back of the Printomatic has a viewfinder in the upper left corner, with a power button next to it. A large door opens to reveal the camera's film compartment; three small LEDS along the bottom indicate how much of the camera's battery life remains, if the camera is printing and if there's a memory card.

Like the HP Sprocket, Kodak’s Printomatic uses Zink paper, rather than traditional photo paper; Zink uses heat to activate colors in the paper, whereas photo paper (such as from Polaroids) has chemicals that are light-activated. In general, we’ve found that Zink photos tend to be more washed out.

The 2 x 3-inch Zink prints from the Printomatic were OK, but nothing compared to prints from real film. All of the photos I took had a pinkish hue, which was most evident in whitish and gray areas. In general, the photos were much less saturated than Polaroid-style photos, such as those from Fujifilm cameras.

When composing a shot, you have to leave a fair amount of room around the subject when looking through the viewfinder, or else the subject will be cropped off in the photo.

All of the photos I took had a pinkish hue, which was most evident in whitish and gray areas.

In a few instances, my cat Mervin's ears were out of the frame, even though I could see all of him in the viewfinder.

The digital images recorded by the Printomatic were pretty good, depending on the conditions. The image was 3680 × 2760 pixels in size and included parts of the image that were cut off in the Zink print. A photo of my dog, Hunter, taken outside accurately captured the yellow lab's color and whiskers, and I could make out his individual eyelashes. I saw none of the pink hues that were evident in the prints.

Indoors, quality suffered as the camera tried to account for dimmer conditions. A few shots of my cat, Mervin, were blurry, as the shutter speed was automatically slowed to 1/15 of a second. No cat is going to sit still for that long. Colors were also much more washed out, and the image as a whole was very grainy.

When the Printomatic's flash turned on — you have no control over when this happens — it completely washed out Mervin's face.

Printomatic vs. the Competition

The Printomatic is similar in many respects to the $99 Polaroid Snap; both take 10MP photos and churn out 2 x 3-inch Zink photos, and the two cameras performed similarly. However, the Polaroid has six picture modes, compared to just two for the Kodak, and the Polaroid also has a self-timer, which the Kodak does not.

Another competitor, the $159 HP Sprocket, is also a combination camera and Zink printer, and stores digital copies of your photos. The Sprocket has just a 5MP sensor but connects to a smartphone app. This lets you send photos from your smartphone and print them out on the Sprocket. The Printomatic has no such capability.

The Polaroid Snap has six picture modes, compared to just two for the Kodak, and the Snap has a self-timer, which the Kodak does not.

The Fujifilm SQ10 ($279) is even more expensive but has a few differences. For one, the SQ10 uses instant film, rather than Zink. The Fujifilm camera also has a 3-inch LCD display, which you can use to preview photos before printing them.

Of all the hybrid instant cameras — those that both print a physical photo and store a digital image — the $69 Kodak Printomatic is the least expensive. While the camera works well in good lighting conditions, it didn't do well in other settings, and the Zink prints were mediocre at best — good lighting or not. At this price, the Printomatic is worth considering for a child who likes photography and instant gratification, but expect budget results from this budget camera.