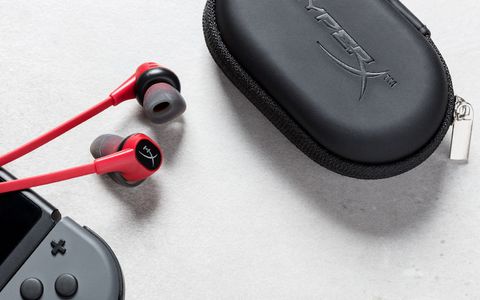 The Cloud Earbuds provide balanced, robust sound in an easy-to-transport profile, but getting a good fit is hard.

"Gaming" and "earbuds" are two words you don't often expect to hear together, but some pretty heavy hitters have tried their hands at the pairing. Razer, MSI, Sennheiser and Sony, among others, have tried to distill the traditionally bulky gaming headset down into a few thin wires and tiny speakers — with decidedly mixed results.

The HyperX Cloud Earbuds ($50) arrive as the latest gadget to attempt this delicate alchemy, and for the most part, they succeed. The Cloud Earbuds provide balanced, robust sound in an easy-to-transport profile, making them ideal for everyday wear and for portable gaming in particular.

However, a few tweaks could have made this good product into a great one. It's almost impossible to get a perfect fit. The phone controls are helpful but hard to reach. The cord-management options are not that extensive.

If you prefer earbuds to regular headphones and if you're getting a ton of use out of your Nintendo Switch's handheld mode, the Cloud Earbuds make a good choice. They'll provide a hearty soundscape and a solid mic at a reasonable price. Whether they're better than a standard pair of music earbuds, though, will depend largely on whether you can finagle the Cloud Earbuds into a good fit.

The Cloud Earbuds feature a 4-foot wire in a striking red. At the top, you'll find two circular, black earbuds, each one of which has a removable, rubbery tip. (The tips feel like nylon or neoprene to me, but HyperX does not specify a material.) The tips are gray, translucent, triangular attachments, with open circles to pipe in sound at one end and small, circular "wings" at the opposite end.

These wings threw me for a loop, until I realized that HyperX wants you to leverage these against your concha (a skin flap that protects your ear canal) to keep the ear tips in place. However, even with this admittedly novel design, the Cloud Earbuds usually felt like they were about to fall out. (To their credit, they never did.)

Beyond that, the Cloud Earbuds keep things pretty simple. You can control the length of the earbuds' wires with a movable plastic clip. There's also a black cylinder on the left earbud wire that houses a microphone and can control phone calls and mobile media.

I'm of two minds about this cylinder. On the one hand, it's a convenient place for the mic; on the other hand, it's too high to comfortably manipulate while you're using a phone, and some volume controls would have been nice, too.

In the interest of fairness, I should say that I rarely wear earbuds, because most models simply don't fit the shape of my ears. But I have occasionally had good luck with soft foam ear tips, and I was optimistic about the Cloud's three different tip sizes.

However, none of these included tips helped me get a comfortable fit. With much finagling, especially of the wings, I was able to force the earbuds to stay put, but they never made a very tight seal. If I were being jostled around on a subway or a turbulent flight, instead of sitting comfortably at my desk, I'm not sure the buds would have stayed in.

However, my ears may not be the best guide for how earbuds fit in general. I handed the Cloud Earbuds off to a co-worker, who said that he also had to experiment with the various tip sizes before he found something that worked for him. But once that was done, he said, they stayed in place well and he didn't even notice their presence after a while.

Right on the box, the Cloud Earbuds advertise that they are compatible with the Nintendo Switch. (The side of the box concedes that they'll work with mobile devices as well.) Because the Cloud Earbuds connect via 3.5mm audio cable, you can use them with pretty much any system, though, so I decided to give them a test across the board.

First off, don't buy the Cloud Earbuds as PC accessories. Four feet of cable might sound like a lot, but it's not, especially if your computer doesn't sit right by your feet. The earbuds provided good balance between sound effects, voice work and music in Thronebreaker: The Witcher Tales, but being tethered to a bulky desktop PC wasn't ideal.

While playing Assassin's Creed Odyssey and Star Trek Online on the PS4, I heard every in-game sound loudly and clearly, and the PS4 parsed my vocal commands without too much trouble.

The Cloud Earbuds work beautifully with the three major consoles, however. Because you can plug them into a PS4 or Xbox One controller, the buds' cable length isn't an issue, and getting them to work is trivially simple. While playing Assassin's Creed Odyssey and Star Trek Online on the PS4, I heard every in-game sound loudly and clearly, and the PS4 parsed my vocal commands without too much trouble. (I attribute my difficulties here more to the PS4's inconsistent voice recognition than anything on HyperX's end.)

I did pay special attention to games on the Nintendo Switch, though. The Legend of Zelda: Breath of the Wild is full of subtle audio cues, both in cutscenes and in the world at large. Hearing Princess Zelda's plaintive voice get gradually louder and louder made for a subtle touch that I appreciated. Likewise, in Mario + Rabbids Kingdom Battle: Donkey Kong Adventure, the Cloud earbuds balanced outlandish sound effects and complex rhythmic music.

While there's nothing in particular that stood out about the Cloud Earbuds' soundscape, it was consistently clean, clear and crisp. It's hard to imagine anyone but the most-discerning audiophiles finding issue with it.

The Cloud Earbuds feature a loud, clear microphone, which works especially well for phone calls. (One recipient said that my voice sounded "perfect.") The button on the mic cylinder, however, is less impressive. While the button is versatile (it can play or pause songs, skip tracks, take phone calls or summon your phone's digital assistant), it's too high up to see and too hard to find with just your fingers.

However, the Cloud Earbuds come with a very attractive little carrying case, which makes stashing them in your bag extremely simple and adds a little value to the overall package.

I listened to tracks from Flogging Molly, The Rolling Stones, Old Crow Medicine Show and G.F. Handel and generally liked what I heard. While the Cloud Earbuds put vocals front and center (probably an outgrowth of their ability to take phone calls), there's still a pretty decent balance between bass and treble and between highs and lows. As with games, there's no one standout part of the soundscape; it's just clean sound for everyday use.

There's nothing that exciting about the Cloud Earbuds. That's good, because it means there's nothing to get in the way of the solid sound and dead-simple functionality. It's also a little disappointing, though, because with a few hardware innovations, the Cloud Earbuds could have been a remarkable accessory, putting earbuds on a par with full-size gaming headsets.

Still, for $50, you get a lot of sound and a fair amount of bells and whistles. If you prefer the earbud format and want something that hooks into your Switch with minimum fuss, the Cloud Earbuds will fit the bill. But if your phone has already evolved past the headphone jack and into Bluetooth-only territory, bear in mind that the Cloud Earbuds will have a more limited range of compatibility.