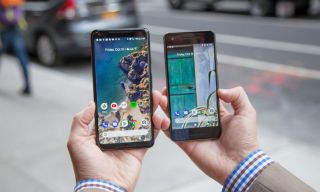 If you buy a Google Pixel 2 XL from the search giant through its 24-month financing program, you'll qualify for a $200 statement credit, according to Slashgear, which earlier reported on the deal. Google will also throw in an 18W USB-C power adapter for free, so you can take advantage of the smartphone's fast charging.

By offering the $200 credit, you're effectively getting a Pixel 2 XL for as little as $649, making it far cheaper than the $999 iPhone X or the $840 Galaxy S9+. Better yet, Google will deliver that $200 credit after just two billing cycles. Typically, smartphone makers that offer similar deals will amortize the savings over the 24-month period.

MORE: The Galaxy S9's Camera Is Great, But The Pixel 2's Is Better

The Google Pixel 2 and Pixel 2 XL are among the best flagship Android handsets available now. But after Samsung released its Galaxy S9 and Galaxy S9+ last week, complete with the Qualcomm Snapdragon 845 and improved camera, it's clear that Google's options are looking a bit outdated in comparison. By offering a better deal on the larger model, Google could perhaps attract more shoppers.

On the other hand, based on our testing the Pixel 2 XL has the best smartphone camera, and the phone gives you a clean version of Android that's always up to date. The Galaxy S8 is just getting Android Oreo now.

Meanwhile, Google is said to be working on a new Pixel it'll likely announce later this year. Details are slim for now, but speculation abounds that the Pixel 3 will come with the same Qualcomm Snapdragon 845 processor as the Galaxy S9s.

Google's $200 deal with the freebie is available through the end of the month.