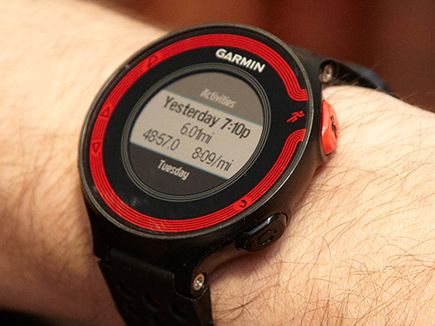 The Garmin Forerunner 220 is a very capable midpriced GPS watch for runners that syncs workouts with your smartphone.

GPS watches have proven popular with runners looking to gain an edge, or more simply to know where and how far they ran without having to carry a phone. The $249 Garmin Forerunner 220 is a solid midpriced model that not only accurately tracks your route, but can also sync data via Bluetooth and pair wirelessly with a heart rate monitor. Whether you're looking to keep better tabs on your runs or you're training for your next race, this watch is one that's worth wearing.

The Forerunner 220 looks every part the sports watch. Its circular face measures 1.75 inches in diameter, and is largely black with a red circle running around the perimeter. On the right side are two buttons, Run and Back, and on the left is a button to turn on the backlight and two more to navigate through menus.

At 1.45 ounces, the Forerunner 220 was light and comfortable to wear on extended runs. It's slightly lighter than the 1.75-ounce TomTom Runner GPS, but it's unlikely that you’ll notice the difference on your wrist.

The Forerunner 220 is rated for 5 atmospheres of pressure, which means you can submerge it up to 150 feet or so below water.

The red-and-black version we tested was reminiscent of the color scheme of Motorola's MOTOACTV GPS watch; a purple-and-white version is also available.

The Garmin Forerunner 220 uses the same smartphone app as the Garmin Vivofit. After downloading the Garmin Connect Mobile app to our iPhone--an Android version is also available-- we created a free user account (you can login using Facebook credentials), then pair the Forerunner with the app. You can also create a profile by going to garminconnect.com. Syncing our iPhone 5s and the Forerunner wasn't as seamless as with other devices. It sometimes took two tries to get our info synced.

The home screen of the app is divided into seven sections: Steps, Activities, Sleep, Courses, Workouts, Badges and Personal Records.

Selecting an Activity lets you view a map of your run, plus more detailed information such as calories burned, average pace, elevation, and stride length and cadence. You can view this as text or as a chart. If you're particularly proud of one of your runs, you can share it via Facebook, Twitter, Email or instant message.

We had previously used the Garmin Connect Mobile app to test the Garmin Vivofit, a fitness band for more casual enthusiasts that tracks your steps and sleep. When we synced the Forerunner with the app, we were somewhat disappointed to see that while our running activities were displayed, the app wasn't smart enough to translate the miles we ran using the Forerunner into Steps.

If you carry your phone with you while you run, you can take advantage of another feature called LiveTracking, which will broadcast your position to friends. However, apps such as RunKeeper also offer this service for free, and carrying your phone--and its built-in GPS--obviates the need for a GPS watch.

If you want additional insight into your workouts, you can also pair the Forerunner with a heart rate sensor or a foot pod. After navigating to the Add Sensor menu on the Forerunner, we selected Heart Rate Monitor, and then turned a Mio Link on. The Forerunner recognized the Mio Link almost instantly, and a small green heart appeared on the Forerunner's home screen.

The Forerunner 220 has a color display, but colors are used rather sparingly. On the lock screen, for example, the hour and the battery life meter are blue. On the Home screen, the only splashes of color are the icons for GPS connectivity and Bluetooth, GPS strength and a figure of a person running. It feels like a bit of a wasted opportunity.

After each mile, the Forerunner 220 would beep and buzz, and the screen would briefly display our pace for the last mile. The display was easy to read throughout our runs.

The Forerunner 220 was able to acquire a GPS signal within a minute, and, for the most part, accurately tracked our runs. The only time it had trouble was when we intentionally ran the battery down to almost nothing. At that point, the Forerunner relied on its accelerometer alone, and credited us with running a mile in 6 minutes and 36 seconds, which is about a minute and a half faster than our best time. (We’ll take it, though.)

After we finished our run, we could go back and view our workout history, which would show not only overall stats, but how we performed on each lap. A Records section showed how fast we ran 1 mile, a 5k, 10k, and our longest run. If we hit or broke one of these records during a run, the watch would beep and display a little award on-screen. It’s a nice bit of motivation.

A training menu in the Forerunner 220 lets you download workouts and a training calendar to the watch from your profile page on Garmin's website. We also like that there is an option for Interval training, and that the watch can store about 200 hours' worth of activity data.

Garmin says that the Forerunner 220 will last up to 6 weeks in watch mode and up to 10 hours when using the GPS. We found those claims to be fairly accurate. To recharge the Forerunner, you must attach a proprietary clip that connects four metal contacts on the back of the watch. On the other end of the clip is a USB plug, which also lets you download data from the watch to your laptop, as well as update the watch's firmware.

For those who are looking for a quality midrange GPS watch, the $249 Garmin Forerunner 220 is a great option. Not only does it record many of the metrics most important for runners, but it can sync wirelessly and connect with an external heart monitor. Its main competition will be the $269 TomTom Runner Cardio, which has an integrated heart rate monitor. Overall, the Garmin Forerunner 220 is an excellent running companion that won’t break the bank.