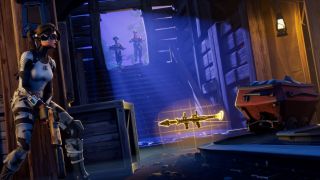 Fortnite: Battle Royale is the hottest game on the planet right now, partly because you can play it just about anywhere. Epic Games' wildly popular survival shooter is available on PS4, Xbox One, Nintendo Switch, PC, Mac and iOS (with Android coming soon), and even allows some of those platforms to play with one another.

However, Fortnite's cross-platform support comes with a few caveats. Not all platforms will play nice with one another, and getting a game going between console and PC requires some extra work. Regardless of your platform of choice, here's who you can -- and can't -- play Fortnite with.

How to Set Up Cross-Play

To play Fortnite across multiple platforms, you'll have to link your console, mobile or PC account with your Epic Games account. You can do this by logging into or creating an Epic account on EpicGames.com and selecting Account > Connected Accounts. Be sure to connect all platform accounts you plan on playing with, whether you're on Switch, PS4, Xbox One or all three.

Once your accounts are properly linked, you'll be able to invite friends from other platforms to your Fortnite party by selecting "Epic Friends" from the game's main menu.

The PS4 version of Fortnite supports cross-play with PC, Mac, iOS and Android, with support for other platforms coming soon. It also supports cross-progression across all of these platforms, meaning that you can link your Epic Games account to your PlayStation account and keep your progress and rewards no matter where you play.

After years of refusing to play nice, Sony announced in September 2018 that it will finally allow cross-play between the PS4, Xbox One and Nintendo Switch versions of Fortnite. According to a blog post from Sony Interactive Entertainment Global CEO John Kodera, Sony and Epic will begin testing the feature in an open beta starting Sept. 26 "that will allow for cross platform gameplay, progression and commerce across PlayStation 4, Android, iOS, Nintendo Switch, Xbox One, Microsoft Windows, and Mac operating systems."

No word yet on whether or not this change will spread to other PS4 games beyond Fortnite.

As of Fortnite's version 3.3 update, folks on Xbox can enjoy the same same cross-platform and cross-progression perks as the PS4 version of the game. That means Xbox players can play with folks on PC, Mac, iOS and Android, as well as retain their progress across those places. As mentioned above, cross-play support between Xbox One and PS4 is currently in open beta.

The Switch version of Fortnite includes cross-play with PC, Mac, Xbox One and mobile players. It's also the first game on the Switch to allow you to use a 3.5 millimeter headset to talk, without using Nintendo's multiplayer app. Again, Switch to PS4 cross-play is in open beta.