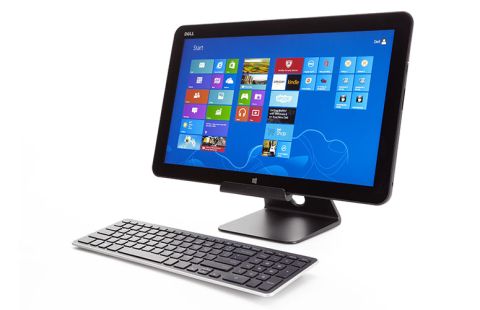 The latest version of the XPS 18 gets more power and battery life, making our top portable all-in-one PC even better.

One of our favorite all-in-ones from 2013 has returned with some welcome upgrades. While it has the same sleek 18-inch design as its predecessor, the revamped Dell XPS 18 ($1,500 as tested, starting at $800) features a 2 GHz Intel Core-i7 CPU, 8GB of RAM and a 256 GB SSD. Not only does this combination provide greater power, but the XPS 18 lasts even longer on a charge than the previous model. If you like the idea of an all-in-one you -- and the rest of the family -- can move from room to room, this is the all-in-one to buy.

Sleek yet versatile, the design of the XPS 18 2014 is identical to last year's model. It features an 18.4-inch, 1920 x 1080 touch screen mounted to a black plastic tabletlike body. Around back are two plastic folding legs for propping up the XPS 18 without a stand, giving you the choice of a traditional desktop stance or a low-profile easel mode. The only markings on the front are the Dell logo in the top left and the capacitive touch Windows button in the middle.

At 18.25 x 11.17 x 0.7 and weighing five pounds, the XPS 18 is the king of all-in-one lightness. It's 3 pounds lighter than the 20-inch Lenovo IdeaCentre Flex 20, and a staggering 14 pounds less than the 23-inch ASUS ET2322INTH. While the sheer size of the XPS 18 can feel unwieldy at times, it's infinitely more portable that most all-in-ones, and works just fine for a system that can double as a tablet in a pinch.

The stand for the XPS 18 with comes with three out of four configurations, but can be purchased separately for $100. The black die-cast zinc stand features a power jack hidden beneath the plastic hinge, which delivers power to the XPS 18 via a 7-pin magnetic connector at the bottom of the cradle.

The stand lets you angle the XPS 18 like you would a traditional all-in-one, while still allowing you to grab the device like a tablet and go at a moment's notice.

Every XPS 18 comes with a Dell Wireless Tangerine keyboard and mouse. The black plastic Chiclet-style keyboard features scissor switch keys and a full numpad After less than five minutes of typing, I hit my typical average of 75 words per minute. I do wish the keyboard were backlit.

The plain-looking black plastic mouse offers a four-button layout. There's two normal mouse buttons on top and two buttons on each side used for Windows 8 gestures (e.g., pressing side button while moving the mouse to the left calls up the charms bar). The mouse should be easy to use for both left- and right-handed users.

Both peripherals connect using Logitech's proprietary wireless technology, which provided lag-free performance. The XPS 18 has a wireless receiver built in, so you don't need an extra dongle.

From table to couch, the Dell XPS 18's 18.4-inch display delivered rich colors and wide viewing angles. When I watched Key and Peele's Substitute Teacher sketch, the looks on the students' bored but detailed faces looked great. Colors were also spot on, with the slate lab tables contrasted nicely by one of the characters' strawberry blond hair.

The XPS 18's responds quickly to Windows 8.1 gestures and multitouch motions like pinch to zoom. Even navigating around Chrome is a joy and less prone to accidental input, thanks to the massive 18-inch touch screen.

Located behind the mesh grilles on the left and right sides, the stereo speakers on the XPS 18 delivered weak audio at first. After I tweaked the settings in the bundled MAXX Audio software, the lows in Ferry Corsten's "Fire" sounded much punchier, but there was still a slight tinny sound to the highs.

The XPS 18 comes with Windows 8.1, along with Dell software such as Dell Backup and Recovery and Waves MAXX Audio. Other third-party software includes McAfee LiveSafe Internet Security, Adobe Revel and a trial for Microsoft Office.

Another feature promoted by Dell is the ability of the XPS 18 to act as a virtual game surface, similar to Lenovo's Horizon tablet. This is best demonstrated by the pre-installed Shuffle Party app, which lets you go bowling or play shuffleboard using the XPS 18's touch screen. I had a good time playing head-to-head shuffleboard, but bowling felt lonely due to the lack of two-player option.

There are other apps that allow for simultaneous use of the touch screen, such as Fingertapps Instruments and Air Hockey, but you'll need to download them from the Windows Store.

All ports are located on the left side of the XPS 18. You'll find two USB 3.0 ports, a headset jack, power jack and an 8-in-1 media card reader.

Our $1,500 configuration of the XPS 18 features a 2 GHz Intel Core i7-4510U CPU, 8GB of RAM and a 256 GB solid state drive. I didn't encounter any hiccups when I watched a 1080p movie while installing a game, or surfed the Web with 10 tabs open in Chrome while performing a system scan with McAfee LiveSafe.

The combination of a 1920 x 1080 display and integrated Intel HD 4400 graphics limits the XPS 18 to mostly casual games. Playing turn-based card game Hearthstone: Heroes of Warcraft at its native resolution on medium settings resulted in occasional lag, while World of Warcraft at auto settings and the same resolution resulted in an unplayable 15 fps.

While most all-in-ones are rooted to a desk or table, the XPS 18 is meant to be moved to and fro. The XPS 18 has more than enough battery life to let you look up some new recipes in the kitchen or play a few games of Scrabble with some friends in the living room.

The XPS 18 lasted 5 hours and 25 minutes on the Tom's Guide battery test (continuous Web surfing over Wi-Fi at 100 nits). That runtime is 2 hours longer than the Lenovo IdeaCentre Flex 20 (3:27).

While the high-end XPS 18 is certainly faster than lower priced models, the $800 configuration with the stand provides the best value. Even with less power, the $800 Core i3 model is fine for everyday computing tasks like watching movies, checking email and shopping online.

The XPS 18 was already one of our favorite all-in-one PCs because it's portable enough to use in pretty much any room you like. We also continue to dig the versatile stand and family-friendly gaming action. This new version lasts more than an hour longer on a charge while delivering a serious speed boost. I'd prefer more graphics oomph for my $1,500 -- and 18 inches might not be a big enough  screen for some -- but if you want an all-in-one and supersized tablet in a single device, the XPS 18 is an excellent choice.