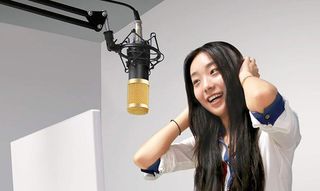 Aside from the choice between PC and Mac, few topics in the tech world are more fraught or contentious than deciding which kind of microphone to use.

Our forum user, lukerh, decided to dip his toe into the world of audio recording and is eyeing two potential tools for the job:

"For simple, good voice capture, not podcasts or anything like that, would the Neewer NW-800 be the better choice or the Behringer XM8500?" he asked. lukerh intends to use the mic with a Behringer UMC22 amp.

The differences between the two microphones come in three primary areas: construction, brand and price.

Price is the easiest to tackle, assuming you want to pick up the gadget on Amazon. The Behringer XM8500 comes all by its lonesome, sans cables or accessories of any kind, for $20. Compare and contrast to the Neewer NW-800, which comes with a shock mount, a foam cover and a 3.5mm audio cable, all for $19. The Neewer seems like the better deal, assuming that the quality of the two products is the same.

That brings us to brand, which is where things get a little dicey. Neewer and Behringer are similar brands, in that they both try to bring a premium look and feel to what are otherwise cheap audio products. Let's be perfectly clear: Neither Neewer nor Behringer is a fantastic audio brand compared to the likes of Rode or Blue. If you're spending $20 on a mic, you shouldn't expect the quality you'd get from those two microphone makers. But since lukerh admittedly doesn't need podcast-quality gear, is there any reason to favor either Neewer or Behringer over the other?

Not as far as I can tell. Behringer is the older and more reliable brand, but it has a bad reputation among audiophiles for generally cheap build quality, as well as some questionable sources for its design inspirations. I couldn't find much commentary online about Neewer's audio parts — photographers have a decidedly mixed opinion of its camera accessories — but the overall impression of the company is the same. Its products are workable, but you'll get what you pay for. The Amazon reviews for the two mics lukerh is looking at are extremely similar, and very positive for both.

So, the only major difference between the two products is in the construction. The Neewer is a condenser mic, whereas the Behringer is a dynamic mic. Here's a brief summary of the differences: Dynamic mics work by generating a magnetic field with a coil of wire, whereas condenser mics rely on electricity to power a capacitor. As such, dynamic mics are generally a little more durable, whereas condenser mics are a little more sensitive. (This varies on a mic-to-mic basis, of course.)

Because lukerh needs simple voice capture for applications that are presumably shorter than a podcast, both mics seem like viable options. Of course, we couldn't get off the hook that easily, so I will say that the Behringer gets my vote. The Neewer is a better deal, but even though Behringer doesn't always put out incredible products, it's a more experienced company with a better pedigree. It's also dedicated to audio only, rather than splitting its attention between audio and cameras. Furthermore, because lukerh's amp is a Behringer as well, it's almost guaranteed to play nice with a mic from that company.

This means that lukerh will have to shell out some additional money for cables and shock mounts and whatnot. But because a good mic can last for many years, and shock mounts and cables are compatible with a wide range of peripherals, it shouldn't be too arduous an expense.