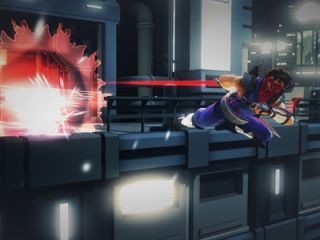 While Capcom's presence was light at this year's New York Comic Con, the house that "Mega Man" built did bring along the highly anticipated "Strider," a downloadable reboot of the cult-classic action series. We had some hands-on time with the frenetic platformer, putting our ninja skills to the test against a swarm of robotic baddies.

Like the original 1989 arcade game and its 1999 sequel, this new "Strider" is an old-school action romp that puts you in control of Strider Hiryu, a ninja tasked with bringing down the oppressive rule of Grand Master Meio in a dystopian future.

Gameplay in "Strider" is as simple as it gets, and any franchise veteran or action game fan will feel right at home with its controls. When playing on Xbox 360, players use the A button to jump, the X button for a basic attack, the Y button for a stronger uppercut, and the B button to launch projectiles. You can double-jump for extra height and cling to walls in classic Strider fashion.

It's a good thing "Strider" is easy to play, because you'll likely be distracted by the game's lush visuals. Though gameplay takes place on a 2D plane, the game's beautiful 3D graphics engine adds depth and detail to the dystopian future it takes place in. If you liked the cel-shaded, comic-inspired look of Hiryu when he appeared in 2011's "Ultimate Marvel vs. Capcom 3," you'll be pleased with the overall design of "Strider."

Our session took place amongst a series of dark corridors, which helped highlight our character's bright blue-and-red ninja suit as we dashed from platform to platform and slashed up a few robots. The action was simple and intuitive, as a few quick taps of the X button turned our mechanical adversaries into clouds of smoke.

While the average 2D platformer sends gamers from left-to-right until they reach a goal, Strider is all about spatial exploration. Hiryu will automatically latch on to any wall that he jumps towards, and can climb above or below thin platforms by pressing the A button and a corresponding direction. We felt stuck during some portions, but we always managed to find the next room by simply experimenting a bit with our environment.

After a few minutes of double-jumping over laser beams and finding new passageways, we reached a boss battle. Our final robot enemy wielded a large staff and did lots of damage when we got too close. Fortunately, we were able to use Hiryu's acrobatic skills to cling to the upper walls and wait for our big openings to attack.

Capcom is promising a free-flowing sense of adventure with "Strider," and fans of like-minded titles such as "Super Metroid" or "Castlevania: Symphony of the Night" should definitely look out for this action-packed reboot. The game is slated to release as a download for Xbox 360, Xbox One, PlayStation 3, PlayStation 4 and PC in early 2014.