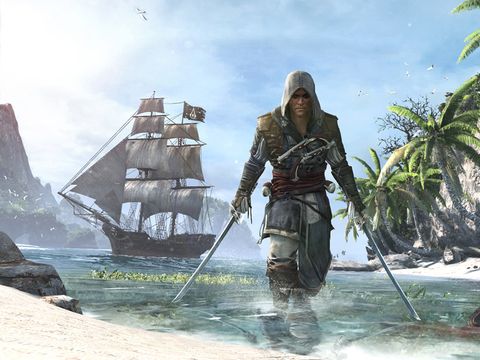 "Assassin's Creed IV" is very different from the five games that preceded it, but proves that a little change can be a good thing.

"Assassin's Creed" has dealt with some pretty heavy topics in the past — holy wars, papal corruption, aboriginal genocide — but "Assassin's Creed IV: Black Flag," which is actually the sixth game in the franchise, shows that the series can explore history's fun side, too.

The game winds the clock back to 1715, where you'll take control of Edward Kenway, a Welsh privateer who becomes a mighty pirate captain. Instead of exploring enormous cities, Edward will lead his loyal crew across the West Indies as he amasses fame and fortune and unravels an ancient mystery.

"Assassin's Creed IV" is very different from the five games that preceded it, but proves that a little change can be a good thing.

Employing parkour to leap from rooftop to rooftop hasn't changed since the medieval Arab Altaïr did it in the first "Assassin's Creed." Edward can fight off multiple enemies with hidden blades, swords and pistols, like the Italian Renaissance killer Ezio in "Assassin's Creed II." Exploring the wilderness while hunting rare animals is something that Connor already experienced during the American Revolutionary War in "Assassin's Creed III."

However, "Assassin's Creed IV" synthesizes all of these old experiences in new and exciting ways. Instead of a handful of huge cities, Edward will explore a plethora of tiny islands all around the Bahamas.

Scaling great heights to map your surroundings, sneaking through heavily guarded fortresses and hunting for hidden treasure is as much fun as it's ever been, although hand-to-hand combat is still somewhat stilted. Even if Edward is surrounded, enemies will generally politely wait their turn before attacking, giving Edward ample time to kill a Spanish sailor, counter another one's attack, break a third one's defense and swing his dual swords directly into a fourth.

As you sail from island to island, you can stop to engage Spanish ships with cannons, chain shot and swivel guns. You'll need to steer the ship, control the weapons and brace your crew for incoming attacks simultaneously, and the experience is exhilarating. You can sink ships for their cargo, or board them to salvage material for repairs, or impress the Spaniards into your crew.

The one area where the gameplay falls down is in its optional objectives. Each plot mission has a few additional parameters (like sneaking into a fort without being detected or sinking a ship with a certain kind of weapon) that you can complete for additional rewards.

Even though they are not required, encouraging players to complete missions in a certain way feels at odds with the otherwise free-form and experimental nature of the game. Giving players a whole host of toys to play with, and then taking most of them away to complete a mission the "right" way, feels counterintuitive.

"Assassin's Creed" is not a series that really needs a multiplayer mode, and yet the last three games have implemented it with surprisingly good results. "Assassin's Creed IV" continues their tradition without shaking things up too much.

Instead of action-packed death matches, "Assassin's Creed IV" encourages players to use stealth and trickery to pull ahead. Each player receives a target to hunt, and in turn, is hunted by another player.

Each player resembles one of the regular townsfolk that inhabit the cities, jungles and wharves in each map, so the trick is to keep your actions as low-key as possible while distinguishing other players from similar-looking AI characters.

The game provides both free-for-all and team-based modes, and they both provide tense, thoughtful fun. The multiplayer is generally not as much fun as advancing the single-player campaign, but it's an enjoyable diversion that maintains a distinct "Assassin's Creed" feeling.

In terms of replayability, "Assassin's Creed IV" doesn't provide much incentive to play it again from scratch, but there are dozens of islands, optional challenges to complete and trinkets to collect. Even after you've finished the main story, you can go back to claim anything you've missed.

Next Page A pirate's life for me