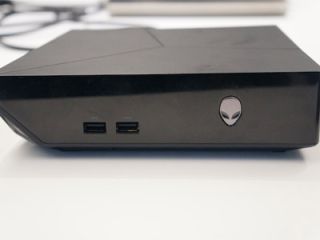 If Valve and it's hardware partners are right, 2014 will be the year of the Steam Machine — a set-top box that runs Valve's game-centric SteamOS operating system. And Alienware is hoping to lead the charge. Aiming for the 65-million-member user base that currently uses the Steam game download service, Alienware has been working with Valve for over a year to create a box that will be competitive with next-gen consoles PlayStation 4 and Xbox One. After going hands-on with a prototype here at CES 2014, we'd say that Alienware is definitely on the right path.

Alienware was vague on specs, displaying just a shell of the box with tantalizing cutouts showing off potential ports and slots. However, we did learn that the company has created a proprietary motherboard designed for a smaller device. The box will also feature a new venting solution that sucks air into the box, blowing the hot air out dual exhaust vents along the back.

MORE: Most Anticipated Games of 2014

The prototype is slightly bigger than a Roku set-top box and comprised of matte and glossy black plastic. We noticed a number of intersecting lines resembling the LED strips found on the current Alienware notebooks. Company reps confirmed that the box will feature some of Alienware's trademark pizzazz.

We weren't able to test out Alienware's prototype directly. The company did give us a taste though, demoing Valve's Steam OS on an Alienware 14 while using the the company's innovative Steam controller. Once we became acquainted with the controller with its two haptic trackballs in lieu of dual analog sticks, playing "Borderlands 2" was relatively smooth. In optimal conditions, both Alienware and Valve claim that Steam OS will only exhibit single digit latency when using a wired controller.

In addition to the Steam Machine, Alienware will begin offering a Steam version of the X51, one of the company's popular desktop gaming solutions. Both units will become available globally sometime in 2014.