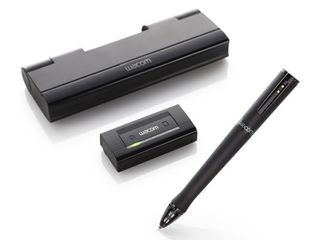 Tuesday Wacom revealed the Inkling, a new digital sketch pen that literally traces what you draw (via its ballpoint tip) on any sketchbook or standard piece of paper.

The device seemingly addresses that gray area between sketching on paper and drawing the final product in Adobe Illustrator or other vector-based software, the place where creative brainstorming and rough conceptual art takes place. Inkling is not meant to replace the Wacom Intuos pen tablets and Cintiq interactive pen displays, but does replace the annoying task of scanning a pencil or pen-based sketch onto the PC or Mac for digital re-tracing.

"Virtually anyone who uses sketching to capture their creative ideas and wants to have their drawings in a digital format to e-mail, archive or further refine on their computer can benefit from Inkling," the company said. "A graphic designer could use Inkling to create rough concepts on paper for a new advertising campaign and then review and share these concepts on the computer with colleagues during a brainstorming meeting later that day."

Wacom's Inkling comprises of both hardware and software components. On the hardware side, the pen and a wireless receiver captures and stores the digital artwork -- thousands of sketches, according to Wacom. The ballpoint aspect even uses Wacom's pressure sensing technology (1024 levels of sensitivity) which captures line thickness based on how hard the artist bears down on the paper, and the angle of the pen. The receiver itself can be clipped to the edge of standard paper or sketchbooks, and the position can be adjusted for left or right handed users to provide the receiver with an uninterrupted line of sight with the pen tip.

"When sketching is complete, the receiver is connected to the user's computer via USB to transfer the digital files," the company explained. "Files can be opened with the included Inkling Sketch Manager software to edit, delete or add layers as well as to change formats and transfer the files for adjustment and editing in creative software applications."

Currently Inkling is compatible with Adobe Photoshop (CS3 or newer), Adobe Illustrator (CS3 or newer) and Autodesk Sketchbook Pro 2011. Alternatively, files can be saved in JPG, BMP, TIFF, PNG, SVG and PDF formats for use with other applications.

Wacom said that Inkling will be available online at Amazon (www.amazon.com) and the Wacom Store (www.wacom.com/store) beginning in the latter half of September for $199.00 USD.