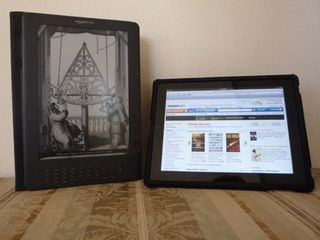 It's been a long struggle for e-readers, but they officially arrived this past July when Amazon announced that e-books had begun outselling hardcover books . After so many years of failure, it seemed the e-book reader had finally arrived.

The road to success was bumpier than the ones featured on the TV series "IRT Deadliest Roads," with countless failed e-readers littering the roadside. Part of the problem was that past efforts were lacking in hardware. E-books really were an idea ahead of their time and it took a long time for the technology to catch up. It finally arrived with E Ink displays.

The next problem was the software. I've seen countless great hardware platforms come and go because no one made software for it (Amiga, anyone?). The same holds true for e-readers. You can't get off the ground if no one will carry or sell the books. For the longest time, the effort was driven by the hardware companies, while the "software" providers, publishers, sat on the sidelines. It really took a vendor like Amazon to make this happen. They had the volume to go to publishers and say "we can make this happen."

Finally, we needed a form of delivery, and something better than the old tethered method. The advent of 3G and mass market Wi-Fi made that possible.

It took a while for this perfect storm to form. Amazon led the way, thanks to its prominence in the publishing world, and others have followed, among them Apple's iPad, although it is a far more multi-use device. There are other e-readers, some sold by book stores desperate to not lose customers, but none of them have grabbed traction like the Kindle.

The holidays are coming up, so no doubt someone you know will ask for one of these gadgets. But do you get them "just" the e-reader Kindle, or the multi-purpose iPad? Really, this is not an either/or choice, as they serve different use cases. The real question is, is a dedicated e-reader like the Kindle worth having a separate device in addition to a general purpose device like the more expensive iPad (or one of its competitors)? Let's dig in.