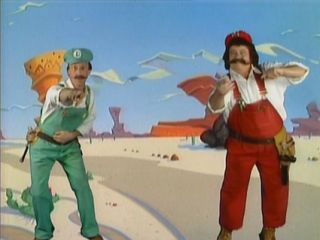 The latest rumor circulating the Internet in regards to Nintendo's upcoming console, dubbed Project Cafe, suggests that the controller will feature a front-facing camera. This will supposedly allow the user to take pictures that can be imported directly into the current game.

The news follows previous talk that Nintendo was ditching the "remote" style used with the current Wii system and going with a more traditional Gamecube-like controller setup. Previous leaked images illustrating the "classic" design indicated that the company plans to include a 6-inch touchscreen (but probably smaller, maybe 4-inches) directly into the controller with possible support for a stylus.

That said, Nintendo may simply be incorporating its DSi technology into a controller scheme sans the second non-interactive screen. Additional reports even claim that Nintendo's new 3DS system can be used as a replacement controller, indicating that there could be some sort of connectivity between the Project Cafe controller and the new handheld. The touchscreen aspect may even be detachable, allowing users to remove it from the gamepad "dock" for certain applications.

Speaking to Develop, an unnamed insider begs to differ. "The functions are the same,” the source told Develop. "It is a standard wireless controller added with a front-facing camera and touch screen. That sounds far too much like a 3DS to me. But I can’t confirm this, Nintendo is being very cautious about the details."

As previously reported, Nintendo has teamed up again with AMD in the graphics department, and will use a GPU featuring a custom version of the R700 architecture. But unlike the Wii, the new console will be capable of 1080p, stereoscopic 3D, and may even come packed with an HD projector for playing high-definition games on a wall. Powering the console will be a rumored custom-built, triple-core IBM PowerPC CPU.

Nintendo has acknowledged that the console is in the works and slated for a 2012 release, and plans to officially reveal the Wii successor during E3 2011 early next month. The eventual release of the console should put previous worries about a possible industry crash to rest, as there was concerns about what would happen if the next console generation didn't arrive soon. Previous decade-long stages included the arcade machines, the PC and then the consoles. Digital-only games were slated to be the next stage, but Apple changed all that with the introduction of its iPhone and cheap-but-tasty apps.

Looks like Nintendo may have either saved the industry, or prolonged an eventual market crash. Time will tell.