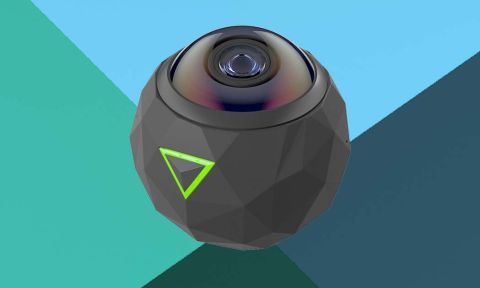 While it doesn't take a full 360-degree image in every direction, the 360fly 4K does capture excellent footage, and it's really easy to use.

As one of the newest areas in digital video, 360-degree cameras present users with a bit of a learning curve. You not only have to know where to place the devices, but also how to convert the video you shoot into a format that's compatible with VR headsets and sites such as YouTube and Facebook. 360fly 4K's camera handles all of that with ease. It's dead-simple to use and takes the best video of any 360 camera we tested, and the 360fly's mobile app makes it incredibly easy to share your adventures with others.

Whereas the Samsung Gear 360 camera looks like a cue ball crossed with a robot from Portal, 360fly's camera is best described as "8-ball meets Dungeons & Dragons dice." The all-black, multifaceted orb keeps its controls simple; there's just one button. Press and hold it to turn the camera on or off — it also vibrates in acknowledgement — and press it briefly to start and stop recording.

While the 360fly doesn't have an LCD screen like the Kodak PixPro SP360 4K, it does have two LEDs, one around the camera's lone button, and one around the base. These change color from blue to red when you start recording. It's a clear visual indicator, and bright enough that I could see the color change in sunlight.

However, the 360fly 4K may be too simple; there's no way to swap out the 64GB of storage, nor can you change the battery. So once you run out of juice, you'll have to wait until the camera recharges via its cradle.

As with all the other 360-degree cameras, the 360fly has a standard tripod screw mount, located on the side opposite the lens. The company also makes a variety of mounts for the camera, including an adaptor for GoPro mounts.

Like the Kodak 360 camera, the 360fly 4K has a single lens on its top, which means this camera can't capture a true spherical image, which the Giroptic 360cam or Samsung Gear 360 camera both can do. What you get is 360 degrees horizontally and 240 degrees vertically. 360fly says that no one wants to record his or her feet, but I say that if you plan to use your footage for VR, you want to capture everything.

Regardless, video from the 360fly looked excellent, capturing vibrant colors and crisp video. In footage I shot while riding my bike along the waterfront of Liberty State Park in New Jersey, the camera picked up details such as the brickwork and the bunting on the ferry terminal. Orange umbrellas were also vibrant in the sun, though the dome-like glass of the 360fly caused a persistent lens flare.

Audio from the camera's two microphones picked up voices well, even in the middle of a downpour (I got caught in a rainstorm on another bike ride). I found that I had to make sure the camera lens was clean and free of streaks; any little smudge gets magnified.

The 360fly mobile app, available for both Android and iOS, is probably the most full-featured of the ones I tested.

When you first launch the app, you can look at other users' videos to get inspired. This also makes the app useful even when the camera isn't connected to your phone.

When the camera is connected, you can use your thumb to scroll around the live feed, or simply move your phone in space. The app also has a Cardboard mode, which splits the video into two images, so you can put your phone into a VR headset and watch videos that way.

360fly's app lets you upload directly to YouTube, properly formatting the videos in the process. (Kodak requires you to download the videos to your computer beforehand.) However, you'll still have to download the content from the 360fly to your phone first. Fortunately, transferring 360fly videos from the camera to my iPhone 6s was much faster than with other 360-degree cameras. A 6-minute video took just 3 minutes to copy over; other cameras took as much as 20 minutes for a similar-size file.

But my wait wasn't over yet; it took another 5-10 minutes to prepare the video for YouTube, and then another few minutes to upload the 745MB file to the site.

The 360fly 4K lasted about an hour when recording video. As mentioned previously, you can't replace the battery, so you'll need to put the camera on its magnetic stand to recharge it; I wish you could simply plug in a USB cable.

The 360fly 4K is one of the better-performing 360 cameras I tested. While it doesn't record a true spherical image, it produced some of the best-looking video of all the cameras in its category. Plus, its mobile app was the easiest for getting my movies up on YouTube. My biggest complaints are that I couldn't replace the 360fly 4K's battery and memory card.

If you're an Android user and want to capture a full 360 degrees in every direction, the Samsung Gear 360 is the camera to get. However, it works with only a select few Samsung smartphones, and is only splash-resistant, not waterproof. For everyone else, the 360fly 4K delivers the best-looking images and video and lets you share them with ease.