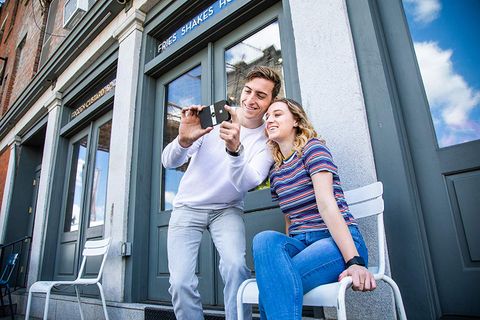 Get the Kodak Smile if you’re looking for a pocketable instant camera for less than $100.

The new generation of instant cameras that has cropped up in recent years lets you enjoy the nostalgia of printed photos while adding some of the niceties of the digital age. Although some of these instant devices are a little too clever, the $99 Kodak Smile does a good job of balancing both the old and new.

Kodak’s Smile camera has a fun sliding mechanism that opens to turn on the camera and reveal its lens and controls. This feature also helps to ensure that the device doesn't turn on accidentally in your pocket. My only quibble is that it takes about 9 seconds for the camera to be ready to shoot.

A small color LCD display on the back shows you a live preview, battery life, the status of the flash, and if there’s any paper inside. This camera is a lot more responsive than the older Kodak MiniShot.

The slide-out section of the Smile reveals several buttons for navigating the camera’s menus and for printing photos. Here, you can add filters, borders and adjust settings (like when you want the flash to turn on). I liked that you can set whether or not the camera automatically prints a photo after you take a shot.

The Smile is available in black with white accents (boring), white with yellow accents or red with pink accents.

Considering that the Smile is ostensibly a Kodak product, it’s a little ironic that it doesn’t use actual photo paper like Fujifilm’s Instax cameras, but instead uses Zink technology, making this camera more like a mini-printer.

I’ve been less than impressed with previous generations of Zink cameras, as the prints were less vibrant and the colors less accurate, than those taken with instant cameras that used actual photo paper.

Evidently, the technology has improved; I was pleasantly surprised by the quality of the photos taken with the Smile. A shot of a baby in a pink jumper sitting on a blue bedsheet was nice and vibrant, as was a photo of a red flower with a green park bench in the background. On the latter, though, there was a loss of detail in the petals.

Still, the prints from the Kodak Smile weren’t as good as those from other Zink cameras. When I took similar shots of a white cat lying on a pink carpet with the Canon Ivy Cliq, the Smile tended to make the cat look more pink than white. The colors in the Cliq’s photos were more accurate.

I also liked that the Smile doesn’t automatically print out every photo you take; given the cost of paper — a pack of 50 sheets costs $24 — I’m loathe to waste a sheet on a lousy photo. I also liked that I could apply filters  (monochrome, Vintage, Aqua) or add a border after taking a shot.

Photos take 35 seconds to print, and unlike previous Kodak cameras that moved the sheet in and out of the camera multiple times, the Smile’s pops out just  once.

Despite its claims of taking 5-megapixel photos, the digital images the camera records are just 854 x 640 pixels. The Smile has 4 megabytes of internal storage, which is good for 2 to 3 photos; you’ll want to get a microSD card.

In addition to adding filters, which are pretty limited, you can also shoot in Photo Booth mode, which will put two photos on a single piece of paper. I also liked that the Smile’s flash can be set to On, Off, or Auto; the older Kodak Printomatic had a flash that fired whether you want it to or not.

You can take about 40 shots before the Smile needs to be recharged via its micro-USB port.

What you don’t get with the Smile are some advanced features found on more expensive instant cameras like the Polaroid Snap Touch, such as the ability to shoot videos, or print photos from your smartphone, like you can with the Ivy Cliq+. But those cameras cost about $60 more.

It’s tempting for camera companies to try and cram all sorts of new features into their products. But the defining proposition of instant cameras, aside from their price, is their simplicity and ease of use. The $99 Kodak Smile gets this right. While it has an LCD and the ability to store and reprint photos, the technology doesn’t get in the way of the experience of taking a picture and having a print mere seconds later. Ultimately, isn’t that what you want out of an instant camera?