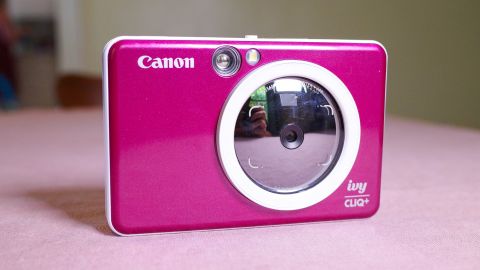 Check out the Canon Ivy Cliq+ if you're looking for an instant camera and printer in one.

A modern instant camera has to do two things: First, it must provide a print within seconds of your taking a photo. And it also has to include some of the niceties of the digital era, in a way that doesn't intrude on nostalgia. Canon's Ivy Cliq+ gets this mostly right: It takes great photos, and, via Bluetooth, lets you add filters and stickers, and even print photos you took on your smartphone. However, given its high price — for an instant camera — there's a few things it could do better.

Although Canon's specs say the Ivy Cliq+ is only a tenth of an inch thinner than the Kodak Smile, it feels much svelter and easier to carry around. The camera is simply and stylishly designed, too: It doesn't feel busy, especially when compared with cameras such as the Fujifilm Instax mini LiPlay, which has far too much going on.

The front of the Cliq+ is a solid color (you can choose from white, blue and red). Surrounding the camera lens is a large, circular selfie mirror, because millenials. A small viewfinder and LED flash sit just above and to the left. On top is a power button, shutter button and a slider to control the flash (On, Off, Auto). A single LED flashes different colors to give you the status of the camera.

On the back is the viewfinder, a button to switch from 2 x 3 photos to 2 x 2 photos and a reprint button. A large door pops off when you need to reload film. The bottom of the camera has a micro USB port for recharging the Cliq+'s battery and a microSD card slot for storing images.

The biggest drawback to the Cliq+'s design is the lack of a display or any means to review the photo you just took on the camera itself. Also, any photo you take with the Cliq+ will be printed, so you have to be extra careful to get your subject lined up just right in the viewfinder. Given the cost of photo paper — a 50-sheet pack of Canon Zink photo paper is $25 — I appreciate the screen on instant cameras like the Kodak Smile, which gives me the option of ensuring that the photo I took is worth printing out.

The Ivy Cliq+ is a Zink instant camera; instead of using actual photo paper, like Fujifilm's Instax cameras, the Cliq+ uses Zink paper, which uses heat to create an image. In general, I've found Fujifilm's photo paper produces much richer photos than Zink, and this still holds true. However, the Cliq+ turned out some of the better photos I've seen from a Zink printer.

Images taken of a white cat on a pink carpet were on the colder side (read: more bluish), but his fur, as well as the colors in the carpet, was rendered more accurately than similar shots taken with the Kodak Smile; that camera tended to turn whites a shade of pink.

One of the other advantages of the Cliq+ is that you can connect it to your smartphone via Bluetooth, and, using the Canon Mini Print app (Android and iOS), use the Cliq+ to print out photos you've taken with your smartphone camera. More than anything, these shots that I printed showcased the Cliq+'s potential. A baby's pink jumper really popped, as did the greenery around a cat sitting outside.

The Mini Print app also lets you do a few more fun things with your photos. You can not only adjust settings such as brightness and contrast but also add borders, stickers, text and filters.

Then, you can opt to print out the photo on a single sheet of paper, or create a four- or nine-sheet layout; as the Zink paper prints without borders, it's a useful way to make one larger image.

Lastly, you can also use the Mini Print app as a remote shutter button for the Cliq+. However, you'll still have to use the camera's viewfinder to line up the shot, because there's no live preview in the app.

The Canon Ivy Cliq+ produces very good-quality Zink prints, especially those from photos taken on your smartphone. Its slim design makes it easy to carry, and it's one of the better-looking instant cameras around. However, at $159, it's the same price as Canon's own PowerShot ELPH 190 digital camera, which has a 10x optical zoom and optical image stabilization. I also don't like the fact that the Ivy Cliq+ prints out every shot I take, but if you're looking for an instant camera that can also double as a mobile printer for your smartphone, the Cliq+ is one to check out.