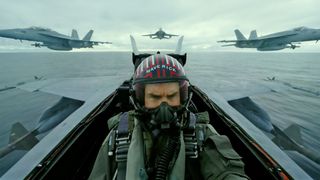 After years of anticipation, Top Gun: Maverick is finally flying into theaters over 30 years after the 1986 cult film premiered. Original star Tom Cruise is starring in the sequel, and while we'll meet some new pilots, Cruise won’t be the only familiar face in the film.

The movie's details are classified. If we told you, we'd have to kill you. Kidding —it takes place an accurate 34 years later, with Cruise reprising his role as Pete “Maverick” Mitchell.

Maverick is now a flight instructor at the Miramar Topgun, where he’s guiding the son of his late flying partner, Nick “Goose” Bradshaw. The trailer below doesn't give much else away. But honestly, we don't need much else than amazing aerial shots to be excited for a Top Gun revival.

Get your flight suit ready. Here's everything you need to know about Top Gun: Maverick.

During San Diego Comic-Con 2019, Tom Cruise popped in during Paramount Pictures’ Terminator: Dark Fate panel to debut the first trailer for Top Gun: Maverick. The action star looks like he just walked off the set of the original, aviator sunglasses and all.

What is the release date for Top Gun: Maverick?

"Aviators are back, the need for speed," Cruise said in the 2017 interview. "We're going to have big, fast machines. It's going to be a competition film, like the first one."

Who are in the cast and crew of Top Gun: Maverick?

Tom Cruise returns to star and stunt in Top Gun: Maverick, as does Val Kilmer, who will reprise his role as Tom "Iceman" Kazansky. "I can’t comment on the screenplay, but we all know what we want to see!" Kilmer wrote about his involvement on Facebook.

Goose's son, Bradley Bradshaw, is played by Miles Teller. In the trailer we see Teller thumping piano keys just like dad and get a glimpse at the temperament he inherited, too.

We also get a look at Jennifer Connelly in the trailer, whose character is described as "a single mom who owns a bar near the base." It seems like she may replace Charlie as Maverick's romantic opposite.

Jon Hamm joins the cast as a hardened Naval officer, or so we think by the striking glares in the trailer. He told Collider he's impressed by the aerial action: "There’s not a lot of CG. Those guys are really up in planes and getting thrown around in multiple Gs."

Finally, we see Ed Harris telling Maverick that he's a dying breed. "The end is inevitable, Maverick, your kind is headed for extinction." Can someone say "drone warfare?"

Joseph Kosinki (Tron: Legacy, Oblivion), directs Top Gun: Maverick, while Hans Zimmer scores the movie. The cinematic pair has worked together on action films before and we're excited to see them team up again.

Kelly McGillis won't be reprising her role as Charlie Blackwood, the civilian flight instructor who played Maverick's love interest in the original.