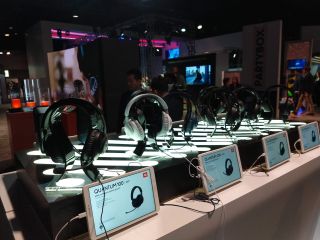 LAS VEGAS – JBL makes excellent audio headphones, but if you’re anything like me, you may wonder why the company has never tried its hand at producing a gaming peripheral. After all, the two most important features of a gaming headset are sound quality and comfort, and JBL already has both of those aspects down pat. Well, audiophiles need wonder no longer, as JBL announced a full range of gaming headsets at CES 2020, from the affordable JBL Quantum 100 ($40), all the way up to the ridiculously fancy JBL Quantum One ($300). The whole series will launch in April 2020.

I got to go hands-on with the JBL Quantum One, and was impressed with what I heard. But I also got to take a look at JBL’s whole lineup, and I admire its commitment to producing a gaming headset for just about every budget and gaming style. Whether you want something cheap and wired, something premium and wireless or something in-between, JBL has a headset with your preferences in mind. I would not be at all surprised if JBL winds up going toe-to-toe with established gaming audio brands like SteelSeries and Astro in the next few years.

While JBL had all of its new gaming headsets (and one set of gaming speakers) on display at CES, the company made it clear that the JBL Quantum One would be its flagship product. This $300 headset is admittedly quite costly, but it has enough features to potentially justify its price. The headset works in wireless, wired USB and 3.5 mm configurations; it’s compatible with every gaming platform; it’s Hi-Res Audio and Discord certified; it’s got RGB lighting on the earcups; it’s got a detachable boom mic.

But, far and away, the headset’s coolest feature is its Sphere 360 Sound with head-tracking. Not only does this make the headset sound like a pair of high-quality speakers broadcasting directly into your ears, but it also means that the sound will move with you as you tilt your head.

I tried the Sphere 360 Sound with both a video demo and a game of Overwatch, and found that it worked just as JBL had promised. By pressing a button on the left earcup, you can “center” the soundscape when you look at the center of a screen. From there, any time you turn your head, the sound will become a little louder in one direction, and a little quieter in the other, as though you were turning toward a source of sound in real life. If you’ve ever used a headset with Audeze technology, Sphere 360 Sound is similar, albeit much cheaper.

As for whether it’s a strictly necessary feature, I’m not sure. While it’s cool to turn your head in any direction and hear the sound adjust accordingly, I found that my head stayed almost completely stationary when I was focused intently on Overwatch. Additionally, Sphere 360 Sound will work only when you plug the Quantum One in via USB; it doesn’t function in wireless or 3.5 mm audio modes. But, on the other hand, if you don’t want this feature, you can always pick up one of the cheaper headsets instead.

While we probably won’t get a chance to review the entire JBL lineup, it’s exciting to get such a wide range of products from a trusted audio brand. If gaming headsets have one general weakness, it’s that they don’t always play music with very high fidelity. Since JBL comes from a music background, these headsets have the potential to be excellent gaming accessories, as well as reliable everyday listening peripherals. We’ll know for sure when we review some of the headsets in April.