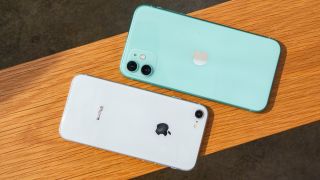 Apple has plans to bring its own 5G modem to the iPhone. But it won't do it for quite some time, according to a new report.

The tech giant is working on building 5G chips for its iPhone, but likely won't be able to bundle it into its iPhones until 2022, Fast Company is reporting, citing someone "with knowledge of the company's plans." That said, a glitch along the way could ultimately push the launch back to 2023.

But before anyone sounds the alarms, that's not to say that Apple won't have a 5G iPhone until then. Quite the contrary, the company is still expected to offer a 5G iPhone 12 next year with help from a Qualcomm chip. If the Fast Company report is accurate, Apple will continue to use that 5G Qualcomm chip until 2022, when it'll switch to its own modem.

Earlier this year Apple acquired Intel's modem business for $1 billion to build its own 5G chips. The company didn't say exactly what it would do with Intel's business, but made clear that it wanted to chart its own course and have more control over the components inside its iPhones. The move means Apple can also reduce its manufacturing costs and boost profitability on the sale of each device.

The problem, however, is that Intel was far behind Qualcomm in building 5G chips. And Apple is largely starting from scratch—or very near it—in its bid to compete against Qualcomm.

The reason Apple will need to wait three or more years to get its own 5G chip into the iPhone is because of the sheer amount of work and research needed to get it operationalized. For Apple, opting for a Qualcomm alternative is much quicker.

For its part, Apple has remained silent on its 5G plans. And it likely will remain quiet until it's ready to deliver new devices.