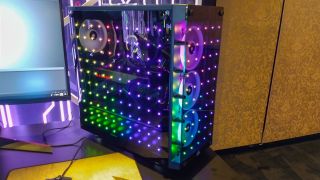 LAS VEGAS — One of the cool things about CES is getting to see concepts from big tech companies. These inventive technologies don’t always see the light of day on retail shelves, but it’s always a treat to get a hint of a potentially big breakthrough months — or years — before it becomes available. Corsair’s latest concept is called Project Orion, and it’s one of the more beautiful spins I’ve seen on a gaming PC lately.

I saw Project Orion at Corsair’s suite at CES 2020, and immediately saw how it could be the next evolution in PC RGB lighting technology. Project Orion can illuminate a whole chassis with gorgeous rainbow lights. But Project Orion doesn’t employ any LED strips; instead, it uses dozens of tiny LED lights, superimposed upon an extremely thin film that adheres to glass. Your whole PC could theoretically light up like a galaxy of rainbow stars.

While actually producing Project Orion is probably very complex, the concept itself is quite simple. Corsair attaches dozens of miniature LED lights (called Callipex, a technology unique to Corsair) to a nearly invisible film, then attaches that film to a glass PC chassis. The gaming rig that Corsair modeled had LEDs on every side, but Corsair could also theoretically produce machines with Callipex lights only on a single panel, perhaps on the front or side of a machine.

From there, users can control Project Orion’s lighting with Corsair’s proprietary iCUE software. Like one of Corsair’s mice, keyboards or headsets, iCUE can sync Orion’s lighting with other Corsair gadgets, or program any number of eye-catching color patterns. From rainbow waves, to solid colors, to visualizers that follow the colors on a computer screen, there will be plenty of ways to make Orion stand out.

One word of warning, however, is that Project Orion will probably not be available in DIY rigs anytime soon. Since Callipex is a Corsair technology, only Corsair has the means to integrate it into a chassis at present. This means that if you want a chassis with Project Orion, you’ll probably have to buy a prebuilt machine. Of course, this could change further down the line if the technology picks up steam and Corsair is able to streamline the manufacturing process.

Since Project Orion is just a proof-of-concept right now, there’s no firm release date or price for the technology. Off the top of his head, a Corsair representative guessed that a full set of Orion lights might add an additional $100 or so to a chassis. Much more than that, and users might not be willing to take the plunge; much less, and Corsair wouldn’t be able to recoup any of its manufacturing costs.

As for whether Corsair could make Project Orion mainstream, it seems like a logical evolution of the RGB craze that’s swept PC gaming over the past few years. Project Orion is both ambitious and extremely attractive. As long as it doesn’t make Corsair’s PCs prohibitively expensive, it’s a nice aesthetic touch. Some gamers will be willing to pony up a little extra cash for such a feature, and others won’t.

If Project Orion makes it to market, Tom’s Guide will have additional coverage on it later this year. If not, it at least makes for some pretty (if extremely hard to focus) pictures.