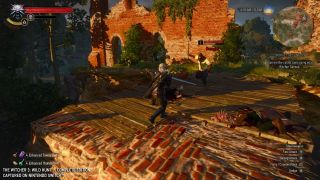 SEATTLE – If you’ve already played The Witcher 3: Wild Hunt, then you know that it can easily take 150 hours, or more, to hunt down last side quest and secret in the massive game. You’ll also know how tempting it feels to do it all over again once you finish. The Witcher 3: Wild Hunt – Complete Edition on Nintendo Switch will let you do just that, and you’ll be able to take the gigantic game with you wherever you go. However, fans have wondered – not without justification – whether the relatively underpowered Switch can do full justice to the massive, gorgeous role-playing game.

Based on my hands-on impressions at PAX West, the answer is “yes, with some important qualifications.” The Witcher 3 on Switch is definitely not a pretty game, with pixelated environments, plain textures and a general feeling of blurriness, even when dealing with characters close-up. However, the game runs without any slowdown, even during combat, and the brilliant sound design seems to have made the trip to the Switch unscathed.

I’m still curious about how the game will perform in more crowded city environments, or when Geralt has to face down gigantic foes slinging powerful spells. But while Witcher 3 on Switch doesn’t seem like the ideal way to experience the game, it’s a very viable one, and that’s impressive in its own right.

(At this point, I also have to point out that multiple reps at the Nintendo booth called this game “The Switcher,” and that’s too good of a moniker to ignore.)

For players familiar with Geralt’s third and final adventure, my Switcher demo began near the beginning of the game. The Witcher tracks a griffin through the war-torn pastures of White Orchard along with his aging mentor, Vesemir. The first thing I noticed was that the excellent music, sound effects and voice acting of The Witcher 3 didn’t lose anything during the porting process. The world-weary Geralt and no-nonsense Vesemir sound as crisp and downtrodden as ever, while the shriek of the griffin and hoofbeats of horses came through loud and clear. The game’s understated orchestral themes are still haunting and moving. The Switcher is a feast for the ears.

In fact, that’s why it’s so strange that the visual design doesn’t match the audio at all. The soundscape is grand and ambitious, while the graphics are just passable. If you played The Witcher 3 on PC with all the graphical settings turned up, then you know just how stunning the game could look. Almost every hair on Geralt’s head seemed to pop, to say nothing of the lush forests, sparkling oceans and smoky taverns. Even with mid-level settings, the game was beautiful.

The Switcher does not use high- or mid-range graphical settings. In fact, this seems to be about as low as things would get on PC. The rep didn’t know the precise resolution of the game, but while it theoretically caps out at 720p in handheld mode, I’m not sure if it ever got that high. Trees and roads in the middle distance looked pixelated and grainy; in the far distance, they didn’t look like much at all. Everything in Geralt’s immediate vicinity looked distinct, but with a bit of a blurry effect, especially around the characters’ eyes. Vesemir’s shoulder wound after the griffin attack looked like a purple splotch.

However, I don’t want to give the impression that the graphics make the game unplayable, either. During dialogue scenes, the characters look distinctive and emote with great detail. Furthermore, the muted graphics help keep the framerate steady. During my time with the game, it never dipped below 30 fps, whether I was conversing with a tavern full of patrons or beating the snot out of some thugs who didn’t want Geralt in their town. This also helps make the characters feel vibrant and alive during cutscenes, thanks to their realistic and varied animations.

Nintendo kept the demo pretty short, so I didn’t have time to do much except ride through White Orchard, beat up some enemies and converse with a few patrons at a tavern. But I mostly came away from the Switcher feeling pretty good about the experience.

To be clear, I don’t think this is the ideal way to experience the game for the first time. The Switch forces the game to make too many graphical sacrifices, and the visuals are a big part of what makes the world of the Witcher so memorable.

However, so many gamers have already played through the Witcher 3, and are just dying for an excuse to replay it. The Switcher feels like the perfect way to do just that, especially since they can take the experience with them anywhere, from the bedroom to the subway to a business trip.

We’ll also have to wait and see how the game holds up in docked mode before we render a verdict, but The Witcher 3 on Switch seems worth following for the moment, at least. The game, which include the substantial Hearts of Stone and Blood and Wine expansions, will be out on Oct. 15, and will cost $60.