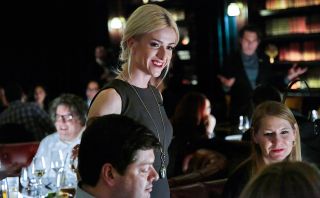 LAS VEGAS — I can’t place it exactly, but it was somewhere between the hors d'oeuvres and the dessert course when I decided to delete all of my social media accounts.

During CES 2020, I had been invited to a dinner by HBO, which was promoting the third season of Westworld, slated to return this year. (Update: Westworld season 3 will start on March 15 on HBO and HBO Go).

I hadn’t seen even one episode of the dystopic TV series, so my knowledge of the show was limited to what I’d gleaned from passing references. I assumed it would have something to do with sex robots and Yul Brynner.

When registering for the dinner, which took place at the Nomad in Las Vegas, we were encouraged to share our handles for Facebook, Instagram, and Twitter, and answer some personal questions. Somewhat wary of the whole thing, I only gave them my Twitter name, and fairly cursory answers to any questions.

I showed up for the dinner, and was escorted with other attendees into a lovely room lined with many leather-bound books. As we were sipping some cocktails and snacking on passed appetizers, a voice materialized over my left shoulder.

“Mike, what do you think of the tuna tartare? I bet Melvin and Walter would approve.”

I was startled enough by someone addressing me from behind, but even more disturbed that they knew the names of my two cats — even if one of them is Mervin, not Melvin. As the evening progressed, our hostess would appear out of nowhere, and spout random facts about one of us, whether it was a love of IPAs, or our parent’s career.

Similarly, our dinner menus were all personalized to our tastes. Mine was a ceviche, followed by a mushroom-encrusted prime rib and a chocolate tartlette, while my other dining companions feasted on lobster pasta and roast chicken.

We weren’t seated randomly, either. My colleagues and I from Tom’s Guide shared a table with two women who worked for a social media company. As the meal started, our host would occasionally come by the table and ask one of us a leading question about ourselves, knowing that the answer would resonate with someone else at the table, and spur conversation.

It was all pretty entertaining, but then it got a bit heavy when the host asked one person who their hero was, which turned out to be her father, a retired FDNY firefighter. The conversation quickly turned to 9/11, and clearly affected another person at the table.

The main host for the evening, who moved and talked in an almost-human-like manner, then introduced us to Incite, the fictional company that’s playing a major part in the upcoming season of Westworld. The conceit is that Incite will take all of your information — likes, dislikes, vacation photos, Twitter posts, Instagrams—every data point possible, and use it to make the optimal decisions for you about your life. Not only will Incite remove the stress out of making choices, but it will always make the right choices for you — or so the company claims.

As an example, the host selected one of the other diners (who most likely was a plant), and, using posts from Facebook and other social media sites, charted the person’s life, from when they were born, through high school, college, marriage, and kids. However, at certain points along the journey, this person had to make some momentous decisions: whether to study abroad, have kids, move from Ohio to Phoenix for work, all of whose repercussions could ripple out in unexpected ways. The host then presented a few other hypotheticals if that person had taken the road less traveled, so to speak. For example, what if the person had studied abroad and met a partner overseas, instead of staying in the U.S. with her high school sweetheart?

Apart from the shocking amount of information they were able to glean from our social media posts — goodbye, Facebook account, I thought — Incite’s business plan makes for an interesting, if creepy storyline.

First, no one should be comfortable turning that much information about themselves to a company. Secondly, how do you define what’s an “optimal” choice? Others have tried crowdsourcing their lives — one guy is even making money off it — but what about when you cede control to a single entity?

In some ways, this is already happening. Whenever you watch a movie on Netflix or a video on YouTube, those services’  algorithms then narrow their recommendations based on what you, as well as what millions of others, have watched. It’s one of the reasons YouTube is so popular: its recommendation engine can suck you down a rabbit hole, in some cases, turning an otherwise regular kid into an alt-right radical.

Would Incite’s decision-making algorithm merely reinforced those decisions it (or you) had already made? And, given that the end goal of a company’s’ recommendation algorithm is to make more money for the company, who’s to say that the decisions it makes for you are going to be completely in your self-interest? I imagine some of these questions will be raised in the upcoming season of Westworld.

At the end of the evening, we were each handed a card that listed our birth date, marital status, occupation, and life expectancy. Mine was 109 years, 5 months, and 3 days, surprising since I just had a thick slab of red meat. Maybe there’s some things all the algorithms in the world can’t predict after all.