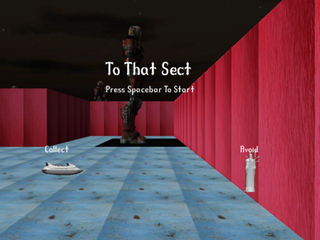 Can computers ever match humanity's abilities to be inspired and to create something artistic? During the most recent Ludum Dare game jam, an online competition held three times annually in which game developers have 48 hours to make a game, Mike Cook submitted a game called "To That Sect."

But Cook, a research associate at Goldsmiths, University of London, didn't make the game. Instead, he made a game-creating artificial intelligence called Angelina, which in turn created the game.

Angelina interpreted the competition's theme of "You Only Get One" and began searching the Internet for inspiration and assets. The word "One" resulted in too many results, so Angelina somehow jumped to the word "founder."

Angelina then created a game, which you can play here, and gave it this disjointed description:

"This is a game about a disgruntled child. A Founder. The game only has one level, and the objective is to reach the exit. Along the way, you must avoid the Tomb as they kill you, and collect the Ship.

I use some sound effects from FreeSound, like the sound of Ship. Using Google and a tool called Metaphor Magnet, I discovered that people feel charmed by Founder sometimes. So I chose a unnerving piece of music from Kevin Macleod's Incompetech website to complement the game's mood. Let me know what you think. In future I'll put more levels into my games, and also make the mechanics more interesting."

So what is the game? It is a simple 3D title in which the player walks around collecting a handful of small cruise ships floating in space while avoiding floating statues called "tombs."

The knowledge that the game emerged from a machine's "mind" rather than a human one, the strange elements, the game's description and the uneasy music accompanying the game gives the whole affair a real sense of creepiness and alienness. It's not a masterpiece, but it is engaging in its own way.

Game developers have been using procedurally generated content for years, using algorithms rather than artists or designers to create pieces of a game. Typically such content is chaotic, such as natural landscapes or organic objects, yet the generated content was always added into games that were created by humans.

But what if every piece of a game were to be procedurally generated? What if the story, the mechanics and the entire design were made by a computer intelligence?

Angelina may be the first real step toward that future.

You can check out "To That Sect" and other games made with the Angelina AI at the GamesByAngelina.org website.