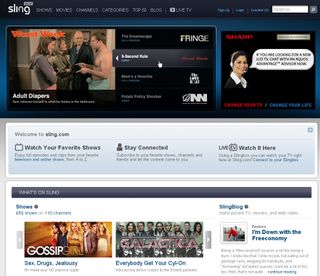 The feature that separates Sling’s site from streaming-video competitors such as Hulu and Joost is that subscribers who have the company’s Slingbox place-shifting device installed at home will be able to watch live TV (or anything recorded on a connected DVR) from anywhere they have Internet access. What’s more, the Web interface (currently in beta) eliminates the need to install any software on the client PC.

As with many other video portals, members can watch whatever is available on the site at the time (Sling’s editorial team will strive to bring fresh content to the fore), or they can subscribe to shows so that they can keep track of new episodes as they’re made available. Subscribers can also add shows, movies, and clips to a queue, which Sling calls a “Quicklist,” so that they can be watched back to back.

Content will be organized into channels (sourced from television networks such as CBS and NBC) and categories (genres such as comedy, drama, sci-fi, and so on). All the content is free, but you will have to sit through a brief ad before the action begins. There is currently no Media Center plug-in available, so if you’re watching from on your home-theater PC, you’ll need to get off your catch to navigate the site and initiate each stream.