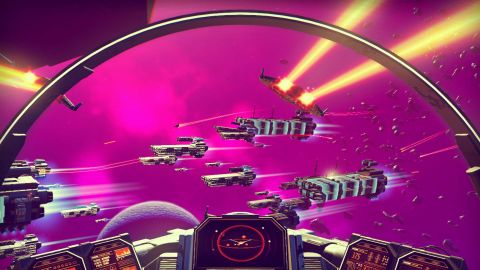 No Man's Sky is a gorgeous game that gives players a satisfying sense of exploration, but the experience can be incredibly repetitive.

No Man's Sky
Steam
$59.99
View
Show More Deals
We check over 130 million products every day for the best prices

"Space is big. Really big. You just won't believe how vastly, hugely, mind-bogglingly big it is. I mean, you may think it's a long way down the road to the chemist's, but that's just peanuts to space." — Douglas Adams, "The Hitchhiker's Guide to the Galaxy"

With all due deference to Douglas Adams, space isn't just big — it's also mostly empty. Aside from a few planets, asteroids and comets located one place or another, there's just not a whole lot going on among the approximately 100 billion stars in Earth's galaxy. Most planets probably don't harbor life; most life probably isn't intelligent; most intelligent life is probably incomprehensible to humans. If No Man's Sky intended to get this point across, it has succeeded.

If, on the other hand, No Man's Sky aimed to be an endlessly enjoyable game that defined new boundaries in the space-simulation genre, it's had mixed results. The setup is simple enough: Take control of a starship and explore quintillions of planets across an impossibly vast galaxy, claiming discoveries of new planets and life forms as you go. The problem is that the concept — which Hello Games delivered as faithfully as possible — incorporates as much tedium as fun.

No Man's Sky isn't the rollicking space adventure that the early demos appeared to promise, nor is it a mindless trudge through an uncaring universe. In actuality, it's a bit of both, and will probably alienate as many gamers as it delights.

When No Man's Sky begins, you find yourself on a deserted planet with a busted spaceship and only a simple mining laser in your hand. There are some rather vague instructions about patching up your ship, but other than that, you're on your own. As you progress through the game, you'll find that this hands-off approach is the modus operandi.

The game never tells you, for example, that you can feed resources into your suit to replenish its life-support and environmental controls. Nor does the game mention that you're probably going to want to build a scanner, which means you need carbon. And for that, you need to bust up some plants, which the game also fails to explain.

A lot of No Man's Sky is like this. There's a certain internal logic and rhythm to the game, but you have to suss it out on your own. Figuring out each detail doesn't feel rewarding, though; instead, it feels like completing another item on a checklist, and that checklist gets longer the more you play.

You get the idea.

What you end up with is not a spaceship for exploring the vastness of the cosmos, but a treadmill. You can see some truly spectacular things, but only if you can bear with the unceasing grind. You can alleviate the tedium with upgrade blueprints (which are totally randomized, so good luck finding the ones you need), but it never completely goes away. The grind is arguably the game's central mechanic.

If (not when — if) you can get past all that, however, there's a somewhat meaty game waiting underneath. There's a lot that you can do in No Man's Sky, and most of it works pretty well. You can chart new star systems and new worlds, engage in space battles with hostile forces, catalogue new forms of planetary life, trade fire with sentry drones, salvage downed ships, explore ancient ruins, break into guarded facilities for new blueprints, hang out at intergalactic trading posts, and more.

My personal favorite activity was meeting alien nonplayer characters and slowly, but surely gathering more words in their esoteric tongues. From an initial state of complete confusion, I began to slowly understand what my alien colleagues were trying to tell me. It's not a bad metaphor for No Man's Sky itself.

"Functional" best describes the myriad forms of gameplay. Space combat works, but it's not up to the level of something you'd see in an honest-to-goodness dogfighting game. (Stopping to recharge shields is especially dull.) Exploring planets by ship, foot and jetpack is simple enough, but the planets are enormous, and interesting waypoints are few and far between. The new life-forms you encounter are sometimes odd enough to warrant a second look (one creature I saw resembled a cross between a Labrador retriever and a triceratops), but they're mostly just variations on real-world mammals and dinosaurs.

One area where the game mostly succeeds, though, is in its ambient, minimalist storytelling. Early on in the game, you'll learn that there are two (possibly three, depending on how you play) potential paths to explore No Man's Sky. Without spoiling anything, one path puts you on the quickest possible route to the center of the galaxy, and the other involves ancient alien artifacts and a more mysterious endgame. Once I found these options, I immediately felt more at home. I was no longer just exploring procedurally generated planets for their own sake; I was doing it in service of a bigger goal.

There is indeed some cool lore, no matter which path you take, and having a goal in mind, however vague or distant, helps make No Man's Sky feel like an adventure rather than an aimless jaunt. On the other hand, having a goal also exacerbates how repetitive the game can become. Explore strange, new world after strange, new world to scrounge up enough material for a few hyperspace jumps. Arrive at your plot-designated waypoint, which gives you a vague bit of story, and another waypoint to reach. Lather, rinse, repeat.

The planets and star systems, which can seem wildly different at first, will also start to boil down to the same basic elements. Maybe the planet is radioactive, or very cold, or very hot, but you're going to have to recharge your suit just the same. You'll find some weird-looking aliens, but you can do that on any planet. Maybe you'll learn a new alien word or find a trading post or come across a derelict ship, but this stuff could happen anywhere. Even the thrill of seeing your name next to a planet you've discovered dims somewhat once you realize that a) everyone has done the same thing and b) few people are likely to ever come across your system again.

At least the game is easy on the eyes. With a full, saturated palette, No Man's Sky prefers the vibrant blues, greens and oranges of gassy nebulae to the stark blacks and whites of a starry night. (Although it would be nice to find that pure black on occasion.) Planets are agreeably garish, and the whole game has a kind of pastel filter that makes it just weird enough to accept at face value.

The sound is, likewise, fine, with ambient electronic music for exploring, and alien grunts and groans rather than spoken dialogue. It's all in keeping with the abstract, experimental nature of the game.

Imagine this: You sit down to watch an episode of Star Trek. The Enterprise glides along through the starry sky, and Capt. Picard narrates that the crew will soon survey a nearby planet that's not known to harbor any sapient life-forms. The away team beams down … then it maps the planet, catalogues its findings, packs up and moves onto the next assignment. There's no diplomatic incident, no moral quandary, no spatial anomaly, no unexpected visitors and no character drama. That's what No Man's Sky feels like.

MORE: Beyond Pokemon Go: 10 Games We Want to See in AR

Then again, it's not totally fair to characterize No Man's Sky as a failed space opera; it's not. It's a game about exploration first and foremost, and when you get into a groove, it's easy to see the title's appeal. Sometimes, you'll juice up your hyperdrive, jump to an unexplored system, find some amazing technology and unexpected critters, and gain a few snippets about your mysterious end goal. But then you'll have to repair your ship, find a better exosuit, barter with incomprehensible aliens and check planet after planet for that one resource you need, and the whole cycle starts all over again.

If you fall for No Man's Sky, I predict you'll fall hard, as many gamers already have. But, whatever kind of hype it generated over the past few years of pre-release development, the game is a surprisingly niche title, and has as much to do with crafting and survival as it does with exploration. It's gonna be a long, long time before you reach your destination, and it's lonely out in space.

No Man's Sky
Steam
$59.99
View
Show More Deals
We check over 130 million products every day for the best prices