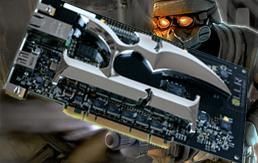 Offload Engine with a Genuine Vengeance

The custom K-Blade heatsink emblazons this card with a Killer “K” knife symbol, and was custom designed for Bigfoot Networks by Thermaltake

Rather than supplementing one or more underpowered CPUs these days, however, TOE units are designed to enable servers to maximize bandwidth consumption and throughput on gigabit (or even 10-gigabit) Ethernet networks. It’s still the case that handling TCP/IP communications consumes significant processing power, and for server computers whose productivity must in part be a function of how well (and how much) they can use the network, the added expense of this kind of network interface is easy to justify, and delivers measurable benefits to the users they serve.

It’s more difficult to justify this kind of capability for a client computer, where built-in gigabit Ethernet (GbE) interfaces are the norm, and where network performance seldom means enough to justify the $90 and up that a GbE TOE interface will typically cost. That explains why Bigfoot Networks has created a product that targets a potentially lucrative market segment—namely, online gamers with broadband connections (NPD Group reports that 62% of all video gamers report that they also play online and 19% of gamers participate in massively multiplayer online role play games (MMORPGs). For this group of users, reducing delays between their desktop machines and the servers with which they must communicate while gaming online can confer a noticeable competitive advantage. It also explains why Bigfoot has endowed the M1 model of the aptly (or at least humorously) named “Killer NIC” with a variety of powerful and interesting features. We’ll cover these in detail in the next segment of this story.