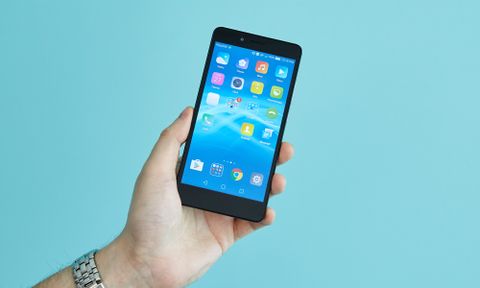 A budget phone may not match $650 flagships from Apple or Samsung, but those sub-$250 handsets have started to pack in a lot of features. Consider the Huawei Ascend 5W, a $179 phone available through discount carrier Republic Wireless. In addition to its supreme affordability, the Ascend 5W boasts some high-end features, such as a big 5.5-inch full-HD screen and a built-in fingerprint sensor. Unfortunately, it also has a number of rough spots, including the lack of a USB Type-C port, as well as choppy performance and a pair of cameras that make your pictures look a bit too dark.

The Ascend 5W is available through Republic Wireless. If you’re unfamiliar with that carrier, Republic is a mobile virtual network operator (MVNO) that piggybacks off of the Sprint and T-Mobile cellular networks. But that’s only when you need a cellular signal. For the most part, Republic prioritizes Wi-Fi for calls and text whenever that’s available.

The result: Republic can charge you less, since you’re theoretically less reliant on cellular data. Republic’s plans start at $15 a month for 500MB of cellular data. Bundling the Ascend 5W into that plan tacks on an additional $11 a month. During our time with the Ascend 5W, calls sounded clear and texts came through just as quickly as they did on other networks. Initial testing of the Ascend 5W on Republic’s service let me make calls seamlessly, though we’ll explore the service in greater depth in an upcoming review of Republic Wireless.

Design: Basic, but not ugly

Though it’s not especially eye-catching, the Ascend 5W looks pretty good for a phone in this price range. It features a black bezel surrounding a 5.5-inch screen up front. Around the back, you get a large, aluminum panel flanked on the top and bottom by plastic endcaps to let antenna signals through. Honestly, it looks a lot like the LeEco Le S3, right down to the same “squircle”-shaped camera placed above another squircle-shaped fingerprint sensor.

Huawei went with a micro-USB port instead of the more modern USB Type-C port favored by phone makers these days. (Huawei put a USB Type-C port on its Mate 9 and Honor 8 phones, though the budget-minded Honor 6X has micro-USB.) The phone’s large bottom bezel is just wasted space. Thankfully, Huawei hasn't gotten rid of the phone's headphone jack.

The 5.5-inch screen on the Ascend 5W definitely out-punches its price. It's big, with a full 1920 x 1080 resolution. Even outside on a sunny day, the screen is bright enough. When I watched the music video for Justice's "Fire" — aside from being reminded that even in 2017, Susan Sarandon has still got it going on — the Ascend 5W's display made it easy to see details such as the video's vintage VHS film treatment and gradients in the clip's bright highlights.

In our tests, we found that the Ascend 5W put out a brightness of 502 nits, which is far above the smartphone average of 431 nits and budget rivals such as the Le Eco Le S3 (440 nits). In fact, at 546 nits, the Moto G4 was one of the only phones in the sub-$200 price range that was brighter.

With a color range covering 108 percent of the sRGB gamut, the Ascend 5W wasn't quite as impressive in this area. However, it still beat the Moto G4's 100 percent. The Le S3 and the smartphone average were more colorful, at 137 percent and 143 percent, respectively.

As for audio, Justice’s “Fire” sounded pretty good, too, with adequate volume. Aside from the lack of bass that all smartphones suffer from, the only other issue I noticed was that the Ascend 5W's mids weren't quite as punchy as those on the LeEco Le S3.

Performance: Not what you'd call smooth

In order to offer a $179 price tag, Huawei clearly sacrificed processing power. Even for a budget handset, where I'm really looking for "good enough" performance, the Ascend 5W's Snapdragon 615 processor, 2GB of RAM and 16GB of onboard storage often struggled to deliver a smooth experience. Sometimes that manifested itself as laggy transitions while I navigated between apps, or stuttered scrolling while I browsed the web. At least there's a microSD slot (expandable up to 32GB) for people who need additional storage, which is going to be pretty much everyone, considering that out of the box, there's only 6.5GB of free space on the phone for you to use.

Our tests confirmed those experiences. On Geekbench 4, which measures overall performance, the Ascend 5W scored 1,930, compared with 2,740 for the Snapdragon 652-powered LeEco Le S3, a phone that costs just $20 more. The score for an average smartphone was even higher, at 3,303, although the Moto G4's score was slightly lower, at 1,728.

The 5W's mediocre performance continued on web browsing performance, where the phone scored 17.93 on the Jetstream 1.1 JavaScript benchmark. In comparison, the Moto G4 hit 22.76, while the LeEco Le S3 did even better, with a score of 45.56. (Larger numbers are better.) The smartphone average of 37.16 was also noticeably better.

Not surprisingly, the Ascend 5W's gaming and graphics prowess was lacking, too. On 3DMark's Ice Storm Unlimited test, the Ascend 5W scored 9,172, which is slightly worse than the Moto G4 (9,752) and significantly lower than the LeEco LeS3 (16,954) and our current smartphone average (17,089).

Tests aside, it's important to mention that because the Ascend 5W's Wi-Fi supports only 802.11 b/g/n standards, it doesn't have the same top speed as newer phones that have support for more advanced 802.11ac wireless networking.

The Ascend 5W comes with a pretty standard set of cameras. There's a 5-megapixel camera up front and a 13-MP shooter around the back. During typical use, I found that both sensors were relatively sharp, although the Ascend 5W's tendency to produce underexposed images puts it at a disadvantage when compared to many of its competitors.

Even in a daytime shot overlooking the Hudson River, the Ascend's image came out too dark, especially on the buildings in the center of the frame. The picture also had a cool, bluish cast that dominated the whole photo. In comparison, a shot taken by the LeEco Le S3 was significantly brighter, and even though the LeEco's camera resolution is only slightly higher, at 16 MP, the Le S3's shot looked noticeably clearer as well.

Indoors, in a well-lit environment, the differences weren't quite as large, although the Ascend 5W's cool color cast was still evident. However, small differences can make a big difference, as you can see when I used the two phones to take a picture of a plushy nearby. Because the Ascend 5W's picture was underexposed once again, the turnip monster's white face was blown out on the left side, whereas the Le S3's picture was not.

But the Ascend 5W's worst shots came in low light. After I took the same photo with the Ascend 5W and the Le S3 in a darkened room with the lights off, I was shocked to see such varied results. The 5W's pic was a big grainy mess, with heavy noise and soft, blurry details. Meanwhile, the Le S3's photo was significantly brighter and less noisy. If I hadn't taken the photos myself, I would have sworn that they were taken at different times.

As for selfies, the Ascend 5W still leaned toward slightly dark, though the differences between its photos and those from other cameras weren't as dramatic. I also appreciate Huawei's implementation of a scene-select tool on the bottom of its camera app, which makes it easy to switch among modes while avoiding the ones you aren't going to use (such as Beauty Mode).

Batteries are lasting longer than ever, even on budget phones. Unfortunately, that's not a trend the Ascend 5W has latched on to. On the Tom's Guide Battery Test (continuous web surfing over a 4G LTE network — Sprint and T-Mobile, in Republic Wireless’ case), the phone lasted just 8 hours and 19 minutes.

Software and OS: Still on Android 6.0

Huawei's EMUI is a relatively simplistic take on Android. But aside from its lack of an app drawer, as well as a drop-down tray that features two screens for notifications and shortcuts instead of one, it doesn’t take a ton of time to get used to.

The bigger issue is that the Ascend 5W runs EMUI 4.1, instead of EMUI 5, which is available on some of Huawei's other phones, such as the Mate 9 and Honor 8. That means the Ascend 5W's operating system is based on the older Android 6.0 instead of Android 7.0, so it lacks features such as multiwindow mode and improved battery life (which would be really handy, considering this phone's subpar longevity).

Huawei has made some of our favorite budget phones, including the Honor 8 and the Honor 6X, but the Ascend 5W isn't in that class. Despite an attractive design with a built-in fingerprint reader and big, bright, 5.5-inch, full-HD display, the Ascend 5W has far too many negatives. Its battery is just so-so, and its small amount of onboard storage and stuttery performance don't deliver the smoothest everyday experience. And if you like taking photos with your phone (and let's be honest, who doesn't?), the underexposed images from its cameras make it harder to produce something you'd want to share with others.

For Republic Wireless customers looking for a solid, affordable phone, our sub-$200 recommendation would be the $199 Moto G4. Although it lacks a fingerprint sensor and has a plastic body, the G4 sports an extra hour of battery life, a better camera and just as good, if not better, performance, depending on your needs. The Ascend 5W will save you $20, but it's not worth all of the trade-offs that come with it.