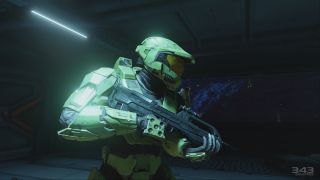 Almost all Xbox gamers have some kind of fond "Halo" memory, whether it was discovering the ominous Flood in the original game, losing days' worth of sleep to "Halo 2" multiplayer or enjoying four-player co-op for the first time in "Halo 3." Knowing how special these games are to shooter fans, 343 Industries has curated more than a decade's worth of "Halo" with "The Master Chief Collection," which brings the first four games in the sci-fi series to Xbox One on Nov. 11.

343 gave us an in-depth look at the collection at E3 2014, where we saw the game's interface, feature set and a good helping of beautifully nostalgic "Halo 2: Anniversary" gameplay.

All four core "Halo" games are accessible from the main menu, with progression indicators that show how far you've gotten in each title's campaign. You can mix and match your favorite "Halo" single-player levels, and, if you really fancy yourself a Master Chief buff, can opt to play though all four games in a seamless marathon playthrough.

If there's a single game in the series that makes this collection worth buying, it’s "Halo 2." This 2004 Xbox classic has gotten the same anniversary treatment as 2011's "Halo: Combat Evolved" remake, with enemies, environments and cutscenes that have been completely reworked for the HD era.

We watched as 343 played through the game's iconic Cairo Station mission, and were stunned by what a difference 10 years' worth of hardware evolution makes. The famed space station was brimming with new details and richer colors, and the enemy Covenant looked a lot more intimidating than they did in 2004. The revamped "Halo 2" levels will be littered with hidden terminals that provide some tidbits on the story of the upcoming "Halo 5."

All of the game's cinematic portions have been redone by Blur Studio, which makes "Halo 2" look like a game made for the new generation of consoles. Characters like Cortana, Sergeant Johnson and the Prophet of Regret (pictured above) now have strikingly realistic facial animations, and we can't wait to re-experience each game's cutscenes with Blur's fresh coat of paint.

A single button tap lets you seamlessly revert to the original look of "Halo 2," which both ignites a rush of nostalgia and showcases how much care 343 has put into its revival of the beloved shooter. This feature was present in 2011's "Halo: Combat Evolved Anniversary," but the power of the Xbox One means that there's absolutely no loading time when switching between old and new versions of the game.

It wouldn't be a "Halo" game without multiplayer, and this collection is shaping up to be the definitive competitive experience for fans of the series. Every map ever created for "Halo" through "Halo 4" is present, and each arena retains the gameplay elements of the title it came from.

As with the campaign, you can opt for multiplayer playlists that span the entire "Halo" franchise, or stick with the multiplayer mode of a single game in the series. Rest easy, "Halo 2" pros — you can play your beloved game's multiplayer exactly as it was 10 years ago.

While "Halo 3" and "Halo 4" aren't getting the same thorough anniversary treatment as the first two titles, 343 says you can look forward to playing both Xbox 360 hits in 1080p at 60 frames per second.

If the thought of playing the first four "Halo" games interchangeably isn't enough for you, "The Master Chief Collection" has some exciting extra content for fans. Buying the game earns you a ticket to the "Halo 5: Guardians" beta, which will allow you to play the upcoming shooter's multiplayer mode from Dec. 27, 2014 to Jan. 17, 2015.

The package also grants you access to "Halo: Nightfall," a Ridley Scott-directed live-action series that tells the origin story of "Halo 5" newcomer Agent Locke. The five-part series will be exclusive to "The Master Chief Collection" at launch, though 343 noted that it will come to other platforms, such as Xbox Video and iTunes, in the future.

343 Industries could have easily slapped the first four "Halo" games onto a single Xbox One disc as an easy cash grab for those anticipating "Halo 5." Instead, the studio crafted a finely-curated collection that shows nothing but overwhelming appreciation for the series' legions of fans.

We look forward to reliving each game's unique worlds — and enjoying some productivity-killing "Halo 2" sessions in the office — when the collection hits in November.