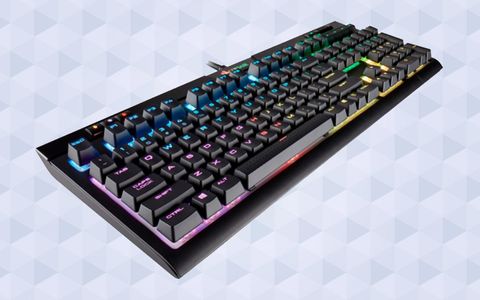 The first Corsair Strafe was a decent keyboard, providing Corsair's signature keyboard quality without a lot of extra bells and whistles. The Corsair Strafe RGB Mk.2 ($150) reintroduces a lot of those bells and whistles, and in turn, the price has gone up, too. If you can look past the high cost of entry, though, the Strafe Mk.2 is one of the finest keyboards on the market today, providing an aesthetically ambitious blend of performance, usability and quality components.

From this keyboard's authentic Cherry MX keys, to its eye-catching color scheme, to its handy discrete media keys, it's hard to think of more than a handful of things the Strafe Mk.2 could have done better. If you want a mechanical keyboard that will take you through your next decade or so of gaming — and you're not afraid to dish out some money for the privilege — the Strafe Mk.2 is an easy recommendation.

The Strafe Mk.2 looks an awful lot like Corsair took a last-gen Strafe and mixed it with a Corsair K70. While the Mk.2 doesn't have the K70's slick aluminum chassis, it does have a little faux wood paneling up top, with a matte-plastic chassis all around. Unlike its predecessor, the Strafe Mk.2 has discrete media keys (and really, at this stage of the game, why would any keyboard that costs more than $100 exclude these?), as well as a detachable wrist rest. Both are welcome additions.

Otherwise, the Strafe Mk.2 looks understated and sleek, just like Corsair's previous model. The full-size keyboard measures about 18 by 8 inches, putting it in line with comparable models from Logitech and Razer. There are also three extra keys in the upper left. These let you switch among multiple profiles, control brightness and activate a game mode, which prevents you from pressing buttons that might take you out of a game, like the Windows button or Alt-Tab.

The gorgeous RGB backlighting lets you set up some very elaborate patterns.

The Strafe Mk.2 lets you choose between Cherry MX Red and Cherry MX Silent Red keys. Either way, you'll be typing on comfortable, linear keys that don't make much noise. While it would have been nice to get some Browns and Blues in the mix, the Strafe Mk.2 feels right at home in either a chaotic tournament or a crowded office. I'm not certain why it was important to offer a choice between Red and Silent, however; the difference between the two is almost negligible: 0.03 mm key travel and a nearly inaudible distinction in sound levels.

Of course, linear keys do have their downsides compared to tactile ones. On TypingTest.com, I scored 117 words per minute with 7 errors, compared to 126 words per minute with 6 errors on my usual Logitech G613 keyboard. The difference is not as stark as it may sound, especially because I am not used to typing on linear mechanical keys, but there's no denying that the process is a little slower.

The Strafe Mk.2 runs on the Corsair Utility Engine (CUE) software which, as before, is a robust and comprehensive program, but not necessarily a user-friendly one. If there's one downside to the Strafe Mk.2, it's that it takes a lot of trial and error before you can make the Corsair Utility Engine do exactly what you want. However, once you learn the program's (many) idiosyncrasies, you can have a ton of fun with both the lighting and the key programming.

Using the CUE, you can set up three onboard profiles and as many profiles stored in your computer as you'd like. You can link each profile with whatever games or programs you choose, and you can set up lighting options for each one. Furthermore, you can program macros and assign them to lesser-used keys or simply reassign keys to perform any keyboard, mouse or media function. If you want, for example, to hit multiple keys at once, create a "double-click" key or (for whatever reason) make the spacebar into an "E," the CUE will let you do it. In that respect, it's one of the more customizable programs out there.

It's also worth mentioning the gorgeous RGB backlighting, which lets you set up some very elaborate patterns. If you want to take a deep dive into the CUE, you can set up interesting, dynamic-lighting profiles for all of your favorite games. Or you can just choose a static color, a rainbow wave, or — my personal favorite — a reactive typing style that shoots rainbows of color across the keyboard every time you type. There's even functionality to sync up the Strafe Mk.2 with the color-sampling Corsair Void headset.

Razer has been experimenting with automatically assigning preprogrammed color patterns for games such as Overwatch, and it'd be nice to see a similar feature in a Corsair product. But with a little time and effort, you can make your own Tracer or D.Va theme, and that will work in a pinch.

I tried out the Strafe Mk.2 with a variety of games, and it met every challenge that came its way. I built up a fearsome Terran base in StarCraft: Remastered; I took down foes with a bevy of turrets as Symmetra in Overwatch; I led my party to victory in Baldur's Gate: Enhanced Edition, and I completed a variety of quests in World of Warcraft. The Strafe Mk.2 responded to my actions quickly and accurately, and it didn't favor any one genre over another.

I tried out the Strafe Mk.2 with a variety of games, and it met every challenge that came its way.

It's worth noting that while the Strafe Mk.2 allows macro recording, it does not have an on-the-fly recording feature or dedicated macro keys. As such, die-hard MMO players might prefer something like the Corsair K95, although the Strafe Mk.2 is just fine for more-casual online play.

Corsair routinely makes some of the best gaming keyboards in the business, and the Strafe Mk.2 is no exception. Thanks to some smart improvements from the first model, the Strafe Mk.2 is a much more versatile and approachable device than its predecessor. It's expensive, true, but you get plenty of value for your money.

If you like linear key switches, the Strafe Mk.2 is one of the very best gaming keyboards on the market for you. Unless you're specifically waiting for Corsair's anticipated wireless keyboard lineup, pick up the Strafe Mk.2 with confidence and make your desk a more colorful place.