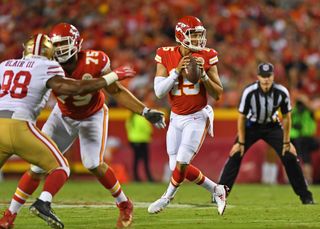 Only four teams remain as conference championship weekend approaches, with the 49ers, Packers, Titans and Chiefs all vying for a spot in the Super Bowl. So if you're wondering how to live stream the NFL Playoffs, you've come to the right place.

Figuring out how to live stream the NFL Playoffs will require some effort. The games will be on national networks, of course, but if you’re a streamer, you’ll want to make sure that you have the right service that will let you watch all of the games live.

Below, we’ve outlined how to watch the games, the services you should go with to never miss a minute of action, and a handy guide to tell you when all of the games will be played this playoff season.

If you’re looking to catch every last game, you’ll need to bounce around to different channels and make sure you’re ready at the right time. Below, here’s a look at all of the games and start times this playoff season:

If you’re traveling outside the country, but don’t want to miss the games, a virtual private network, or VPN, could be an ideal choice. With a VPN service, you can connect to your desired streaming service through a U.S. server, which will let you access any game as if you were at home.

How can I live stream the 2020 NFL Playoffs without a cable or satellite subscription?

If you still have a cable or satellite subscription, or even if you have an over-the-air tuner, you can simply watch the games you want with ease, since they’ll all air on broadcast networks.

But if you’ve cut the cord in your life, you’ll need to find a service (or services) that work with NBC, Fox, CBS, and ABC. And it might not be as simple as you think.

Here’s a guide to the places you can watch the games, complete with the services that offer all four major networks. But before you choose, be sure to input your ZIP codes into each service to see exactly which networks are available:

FuboTV:  FuboTV made its name as a sports-first streaming service, but now offers more than 100 channels for its $55-a-month service. In addition to Fox, you’ll also be able to access NBC and CBS affiliates on FuboTV. That said, ABC isn’t available.  View Deal

Sling TV: At a starting price of $20, Sling TV is the cheapest option in this roundup, but it’s not best. It only comes with NBC and Fox in select markets in the $20-a-month Sling Blue option. View Deal

Hulu's Live TV package costs $55 per month for 60 channels, including ABC, NBC, Fox, and CBS. You can also record up to 50 hours of programming to Hulu's cloud DVR. View Deal

AT&T TV Now: If you don’t mind spending $65 per month for AT&T TV Now’s 45+ channels, you’ll find that you’ll be able to stream all four major networks. Best of all, HBO is included in the package for the same price. View Deal