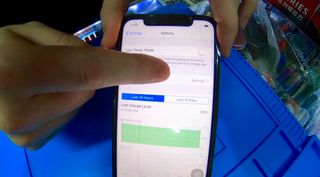 (Image credit: The Art of Repair)

Editors' Note: This article was originally posted on Aug. 8. We've updated it with a response from Apple.

Apple has activated a software feature to discourage people from installing both third-party batteries and original batteries on their own. Unless you pay for an official repair service, iOS will refuse to show battery health information and marking it as needing “Service”.

That feature, apparently added last fall, came to light recently when tech repair expert Justin — from The Art of Repair’s YouTube channel — discovered and investigated why this is happening (more on this later). iFixit also reported on the issue.

If you are a power user, you will probably don’t give a damn about that — except maybe being pissed off that your iPhone is refusing to give you battery health information data, which kind of sucks. But if you are a regular Joe and saw this after going to a third-party battery center, you will probably be very confused and angry that your iPhone is asking you to service your brand new battery.

Of course, if you take the phone to an Apple Store for servicing, they will ask you to pay $69 to replace your new battery for a new battery — even if your battery is an original Apple part — because you are not authorized to make your own repairs.

After this story was originally published, Apple provided us with a statement on why it added the warning:

“We take the safety of our customers very seriously and want to make sure any battery replacement is done properly. There are now over 1,800 Apple authorized service providers across the US so our customers have even more convenient access to quality repairs. Last year we introduced a new feature to notify customers if we were unable to verify that a new, genuine battery was installed by a certified technician following Apple repair processes. This information is there to help protect our customers from damaged, poor quality, or used batteries which can lead to safety or performance issues. This notification does not impact the customer’s ability to use the phone after an unauthorized repair.”

Why is this happening?

Apple’s batteries come with a battery controller made by Texas Instruments. Inside there’s secure memory that stores a secure key that iOS can read, as well as other information like the number of cycles or the battery operating temperature. According to documents unearthed by The Art of Repair, this secure information can’t be read unless you use special software provided by Texas Instrument.

Justin points out that the chip — technically named Single-Cell Li-Ion Battery Fuel Gauge for Battery Pack Integration — has been there for a long time but it has never been used for this purpose until very recently, when Apple decided to activate a feature to authenticate the batteries as both original parts and replaced by Apple official repair service.

It seems that Apple’s geniuses are using special software to authenticate any new batteries they put inside the iPhone. If you try to install an original Apple battery in your phone, you won’t be able to authenticate it unless you run Apple’s software, which is provided by Texas Instruments.

According to The Art of Repair, the software for discouraging users from using third-party services has only been activated in the iPhone XS, XS Max, and XR for now.

In other words: Apple wants you to use their repair service and will use any tactics to do so. Why? With iPhone sales struggling, Apple is relying more on generating revenue from services. Given the amount of iPhones sold to date, AppleCare and repair services is a gold mine for the company. So this all makes sense.

However, the European Union or the United States Congress may say enough is enough and enable “right to repair” laws in addition to the anti-monopoly investigations.