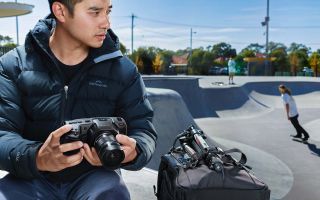 While many digital cameras these days can shoot 4K-resolution video, it's a feature that often takes a back seat to still-photo features. But if you're the type of photographer or filmmaker who tends to focus on video, you can spend thousands of dollars for a high-end professional, full-size camcorder, which will provide you with a lot of quality — but you may not have the budget for it. Aside from that, most stand-alone, camcorder-like models offer consumer-grade video that's more low-end.

It's one of the reasons Blackmagic introduced the Pocket Cinema Camera 4K, which is actually the successor to the company's first "pocket"-type camera, which debuted in 2014. The new model targets those who want a very portable, relatively rugged, versatile camera (or device) that primarily shoots video.

MORE: How to Add Your Own Soundtrack to a Video in Windows 10

To give you a sense of how the Blackmagic Pocket Cinema Camera 4K stands apart from other digital-imaging devices (or falls short of that goal), here's what you need to know:

Is the Blackmagic a digital camera camcorder or some other type of device?

It's a device that doesn't easily fit into any one category. For many years, nearly all consumer-targeted camcorders and action cams have had fixed lenses, meaning that you couldn't swap out lenses the way you can with DSLRs and mirrorless cameras. The Blackmagic is an exception, since it can accept various mirrorless lenses.

But it's not the first of its kind: Several years ago, Sony introduced the NEX-VG20, an interchangeable-lens Handycam camcorder, which accepted Sony mirrorless zoom and prime lenses (A-mount and E-mount lenses).

How portable is it, and who is this product for?

Blackmagic's camera looks to be about the size of a large DSLR, which means it's probably not what most consumers have in mind when they think of something that's "portable." It definitely won't fit in a pocket.

However, enthusiast and prosumer filmmakers will probably put up with a little inconvenience, bulk and weight, if the camera captures high-quality video and has powerful, versatile features. They're also the group who will pay extra for a pricey step-up camera like this. Blackmagic is targeting independent filmmakers, documentary photographers, fashion shooters, travel vloggers, and wedding and corporate videographers, as well as sports and event shooters.

What type of sensor does it have?

What type (or types) of lenses does it accept?

Here's one way Blackmagic's camera stands out from most interchangeable-lens cameras, although it's questionable how valid the claim is. When you buy a Nikon, Canon, Sony, Olympus, Panasonic or Pentax camera, you are committed to that company's lens mount. So, if you buy a Canon camera, you can only use lenses that fit a Canon mount. Likewise for Nikon, Sony and Pentax. Olympus and Panasonic use the same Micro 4/3rds mount, so they're compatible with each other, but not the others.

According to Blackmagic, the Pocket Cinema Camera 4K is compatible with MFT-mount lenses, which is "extremely flexible and allows for different lens adapters so customers can also use PL, C, EF and other types of lenses from manufacturers such as Canon, Nikon, Pentax, Leica and even Panavision." In most other cases, a manufacturer introducing a new camera doesn't say that it's compatible with other manufacturers' lenses via an adapter. That's because such adapters generally come with compromises, such as fewer autofocus options. It will be interesting to see how well this camera works when users are swapping out different lens brands.

Will MFT lenses have a crop factor?

What will be intriguing to see is how the MFT lenses from Panasonic and Olympus perform using a full-frame 4/3rds sensor. Most often, MFT lenses used on Panasonic and Olympus cameras have a 2x crop factor: That means that a 42mm lens is cropped so that it actually appears to function like an 84mm lens. That's nice if you're looking to use a telephoto lens, but if you want to shoot wide angle, your 24mm lens will be cropped and have a view of 48mm, which isn't wide-angle at all.

However, on this Blackmagic model, a 14mm or 42mm will have no crop factor, in the same way a full-frame DSLR or mirrorless camera lack a crop factor.

What video resolutions and frame rates are supported by the Pocket Cinema Camera 4K?

Yes, since it has a still-photo button control. However, technical specs were not yet available. It will probably be 4096 x 2160, or around an 8-MP photo.

How sensitive is the Blackmagic's sensor?

The top ISO for the Pocket Cinema Camera 4K is 25,600, which is quite high, and decent for a 4/3rds sensor. However, cameras such as the Panasonic GH5S, a mirrorless camera that has very similar specs to the Blackmagic camera, can go up to ISO 51,200, and can be expanded up to ISO 204,800.

What kind of memory card does it accept?

The Blackmagic camera can record to SD memory cards as well as UHS-II cards or CFast 2.0 cards. (The latter two cards allow for more professional-level video capture.) However, what many filmmakers are excited about is the fact that you can hook up an external drive, like a solid-state drive (or SSD), and record your footage directly to those drives via a USB-C port. Blackmagic is also claiming that photographers can use the same drive they captured video footage on to do their video editing and post-production work.

Additionally, Blackmagic is claiming that there are no proprietary files, so it will work with all types of software. (In contrast, in still photography, all RAW files are proprietary — to use a Canon RAW file, you need to makes sure your software packages have the proper plug-in.)

How does it record audio?

Audio, one of the most underappreciated aspects in filmmaking, looks quite promising on the Pocket Cinema Camera 4K. First of all, it includes four built-in microphones. But perhaps even more important is that it has a mini XLR input with 48 volts of phantom power. That means you can connect very good-quality, professional-grade mics, which will undoubtedly allow for compelling audio, from interviews to shooting street or on-location footage.

What's the camera body made of, and what's the LCD like?

According to the company, the body of the Blackmagic Pocket Cinema Camera 4K is made of a new, lightweight but-sturdy material: carbon fiber polycarbonate composite. The LCD is a very large, 5-inch touch-screen LCD.

Does it come with software?

How much will the Blackmagic Pocket Cinema Camera 4K cost?

In its press release, Blackmagic priced this camera at $1,295.

When will the Blackmagic Pocket Cinema Camera 4K be available?

Stay tuned for our full review later this year, when the Blackmagic Pocket Cinema Camera 4K becomes available, and we can put it through our battery of tests.