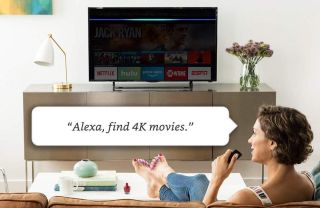 Amazon is upgrading its Fire TV Stick package to include its new Alexa Voice Remote, which now includes volume control and mute buttons—so you no longer have to dive for a second remote when the explosions in that Mission: Impossible movie you're watching threaten to wake your baby.

Amazon's new Alexa Voice Remote, which came out late last year, looks pretty much the same as the old voice remote. A button at the top activates Amazon's voice assistant, and a circular d-pad and two rows of buttons below let you navigate menus and play/pause content. However, on the new remote is a volume rocker as well as a mute button that, when paired with a TV or sound bar, will let you control your TV's volume. It's a small, but handy addition.

For those who already own a Fire TV device, Amazon is also offering the new Alexa Voice Remote for 50 percent off its regular price of $29.99 (£29.99 in the UK), while supplies last.

The Fire TV Stick with the all-new Alexa Voice Remote will cost $39.99 (£39.99 in the UK), which is the same price as the package with the older remote. However, the Fire TV Stick 4K, which also comes with the newer remote, is just $10 more (or £10 more), and can stream 4K content, making it the better long-term deal.

We've generally found Amazon's streaming devices to be very capable, with a well-thought out interface, good quality video, and plenty of apps. Of course, with Alexa built in, by pressing the button on the remote, you can not only look up programs by title, genre, actor and more using your voice, but you also access Alexa's 70,000-plus skills, including the news and weather, streaming music, restaurant recommendations, and more.