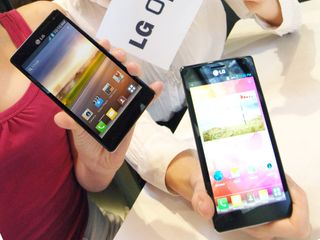 Not to disappoint, LG has unveiled another smartphone to be shown next week at Mobile World Congress, this time its very first quad-core phone, the LG Optimus 4X HD. The company promises its customers PC-like performance in the palm of their thanks to features like Nvidia's 1.5 GHz Tegra 3 "4-PLUS-1" quad-core SoC and 1 GB of LP DDR2 memory.

"The Nvidia Tegra 3 processor is the world's only 4-PLUS-1 Quad-Core mobile processor designed for high-level multimedia performance but utilizes a fifth battery-saver core to handle less demanding tasks such as active standby and music playback," LG said "When running at full speed, the 12-core graphics processing unit (GPU) in Tegra 3 delivers a visually rich experience and console-quality game playability.

In addition to the RAM and SoC, LG's hot new Optimus 4X HD will come packed with a 4.7-inch (1280 x 720) True HD IPS screen, 16 GB of internal storage (eMMC), an 8MP Backside Illumination Sensor camera on the rear and a 1.3MP camera on the front. Android 4.0 Ice Cream Sandwich will be the OS of choice right out of the box, powered by a 2,150 mAh battery.

"LG introduced the world’s first Dual-Core smartphone exactly one year ago and today we’re announcing the next milestone," said Dr. Jong-seok Park, President and CEO of LG Mobile Communications Company. "But speed in itself isn’t what makes LG Optimus 4X HD unique, it’s the benefit we’re bringing to customers with the HD multimedia experience in a mobile form factor."

Additional information on the new Optimus 4X HD will be available at MWC 2012 from February 27 to March 1.