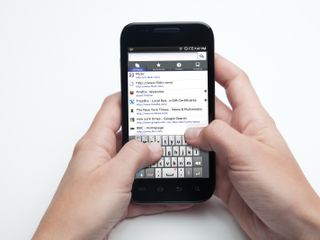 Tuesday morning Mozilla lit up Twitter with news that Firefox 4 for Android was finally available on the Android Market, and has now followed up with an official announcement over on the Mozilla Blog. The company also reports that the new mobile browser is available for Maemo which can be downloaded directly from Mozilla here.

According to Mozilla, Firefox 4 is "up to three times faster" than the stock browser on Android. The drawback is that-- surprise!-- Mozilla's flagship software isn't actually compatible with all Android devices, limited to smartphones packed with the ARMv7 processor and Android 2.0 or later installed. There are also a handful of devices that meet the hardware and software requirements, but still face major issues with the browser including Verizon's original Motorola DROID, the Samsung Galaxy S 4G, Samsung Nexus S and four other devices.

Additionally, smartphones using the ARMv6 processor cannot run Firefox 4 at all. This list of devices is incredibly long and includes the Viewsonic ViewPad 7 tablet, the HTC Legend, the HTC Droid Eris, five LG Optimus phones, three Sony Ericsson Xperia phones and many, many others. Will the overall list be narrowed down in future updates? It's highly doubtful, as the performance on the Motorola DROID hasn't really changed since the first release of Fennec.

But for users who fit the compatibility list, Firefox 4 offers tabbed browsing, bookmarks, add-ons, and Firefox Sync, the latter of which is Mozilla's cool service that links bookmarks between the desktop and mobile browsers. The UI itself is tucked away into the sides, allowing users to see nothing but internet rather than sharing the screen with a bulky interface.

"Firefox for mobile is built on the same technology platform as the desktop version," Firefox said. "With modern Web technologies like HTML5, developers can build rich, interactive applications and websites. Go to Web O’ Wonder and check out the incredible online experiences developers can now create."

To learn more about the new Firefox mobile browser, head here. As it stands now, many Android owners will be better off using the super-fast stock browser or downloading other optimized browsers from the Android Market (or even Amazon's slick Appstore) like Dolphin HD, Skyfire 3.0 and Opera Mobile.