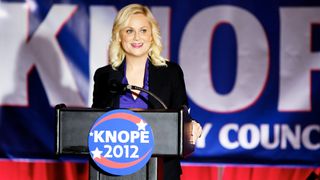 Each month, someone here at Tom's Guide says there are too many streaming services. That's not stopping NBCUniversal, which just declared it's unfurling Peacock in April 2020, and blessing it with modern classic sitcoms, such as Parks and Recreation and The Office.

NBCU did not specify a price, which matches speculation that the service's ad-supported format will be free to watch. You know, like traditional broadcast TV.

Oh and hold onto your bucket hats: Peacock is also going to be chock-full-of-reboots. Both Saved By The Bell and Battlestar Galactica will see new life in new shows on the service. The good news about the latter is that it comes from Mr. Robot show-runner Sam Esmail.

Parks and Rec creator Mike Schur is also going to launch a new show on Peacock. Since it's an NBC network, Alec Baldwin has a project on the docket, titled Dr. Death, it also stars Jamie Dornan and Christian Slater.

Peacock will also have movies, including Shrek, Kung Fu Panda, American Pie, Bridesmaids, A Beautiful Mind and Back to the Future. The Bourne, Despicable Me and Fast & Furious franchises will also be on the Peacock.

MORE: Disney Plus vs. Apple TV Plus: Why Disney Has a Huge Advantage

In other retro TV news, Netflix spent yesterday dancing like Elaine after announcing that the entirety of Seinfeld is coming to its big red streaming service. Another shot across the bow in this streaming sitcom arms race came from HBO Max, which is getting Friends and The Big Bang Theory.

Much like how Disney Plus and Apple TV Plus will launch in November 2019, HBO Max and Peacock will both come out in April.