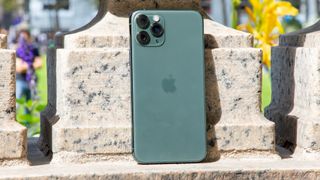 Before Apple started making its own internal hardware for the iPhone and iPad, it partnered with other companies to provide components. One partnership, between Apple and GPU maker Imagination Technologies, ended in 2017 under a dark cloud, but now the two have fully reconciled and are joining forces once more.

In an official announcement, Imagination has said that it has “a new multi-year license agreement” with Apple, replacing a different agreement first made in 2014. This new agreement also allows Apple greater access to the whole of Imagination’s intellectual property, which also includes AR/VR and automotive technology.

Imagination designs the IMG (previously called PowerVR) line of GPUs, which it then licenses to other companies to build, including Apple. While it's possible that the latest IMG A-Series chips could appear in the upcoming iPhone 12, Imagination also produces technology for augmented reality, which Apple could find useful for its AR Glasses project, as well as products that relate to the AI and automotive sectors, which may help Apple expand its product range.

The ending of Apple and Imagination’s prior agreement (as reported in the Financial Times) caused a lot of tension between them. When Imagination announced that Apple, its largest customer, would no longer be using its products, its stock price collapsed.

Imagination stated at the time that it believed Apple may infringe on its copyright when designing its own proprietary chips, which led to eventual threats of a lawsuit after informal discussions broke down.

The threat of legal action disappeared in 2018 when Imagination was bought out by private equity firm Canyon Bridge, and Imagination maintained throughout the period in question that it was still interested in a different agreement with the tech giant.