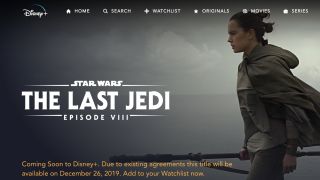 Disney Plus is here, it's huge and it's not exactly truly complete. We've already seen every single Disney Plus show that's available at launch, but (somehow) that epic list has some holes in it.

For starters, don't expect Indiana Jones' adventures on Disney Plus, nor should you expect to cry through Coco (which has a page on Disney Plus, though the film isn't there) on the new-born service.

This list comes from an intrepid redditor, u/LordVader3000, whose work shows that the circle of titles is far from complete, as a bunch of well-known films, including National Treasure and The Last Jedi, are still stuck on Amazon or Netflix. Again, both have pages in Disney Plus, but the films are missing. Bonus footage of National Treasure is offered instead.

The aforementioned Indiana Jones content has an asterisk, however, because distribution rights are owned by Paramount, even though Disney owns a part of that series. Not that you should know the difference, or who has rights to what, but those who associate The House of The Mouse with Dr. Jones' adventures might find the service lacking some of the treasure they expect.

The "Not Included for Unknown Reasons" section of LordVader3000's includes titles that could wind up disappointing fans, such as The Muppet  Show and The Star Wars Holiday Special.

However, I'm not surprised that Toy Story 4 and The Lion King (2019) are on that section, as both came out recently, and Disney probably doesn't want to throw out after-theatre sales of digital downloads and Blu-rays. Personally, I'm a bit annoyed that The Mighty Ducks movies won't be in the service, but it's not the biggest issue.

The least surprising entry in the entire Reddit post is Song Of The South, a 1946 film highly criticized for its racial elements, with top Google results asking "Is This Racist?" and "Just How Racist Is Disney's 'Song of the South'?"