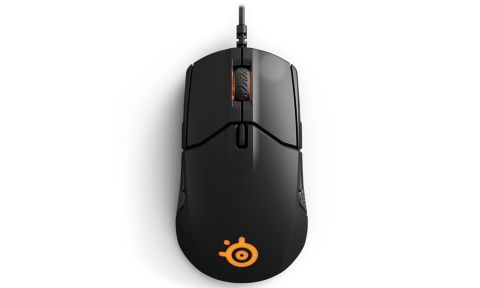 If the SteelSeries Sensei 310 isn't the absolute last word in ambidextrous gaming mice, it's at least pretty close to the end of the book.

The SteelSeries Sensei is easily one of the most underrated mice on the market, and it's hard to say why people rate it low. It features a sleek design, excellent software and full ambidextrous support, which is more than a lot of newer mice can say.

Enter the SteelSeries Sensei 310 ($60), a new spin on an old standard of our best gaming mouse page, complete with two sets of thumb buttons, RGB backlighting and a more comfortable grip than ever. SteelSeries has even addressed the peripheral's cost, knocking $30 off of the old model's price. If the Sensei 310 isn't the absolute last word in ambidextrous gaming mice, it's at least pretty close to the end of the book.

If you're familiar with the old Sensei (the wired one, although we liked its wireless counterpart as well), you'll have a basic idea of what the new one looks like. Like its predecessor, the Sensei 310 is an ambidextrous mouse with two thumb buttons on either side, a clickable scroll wheel and a dots-per-inch sensitivity (DPI) adjuster in the center.

All told, there are eight programmable buttons, although you'll probably use only six of them. (I found it was better to deactivate the thumb buttons on my nondominant side; other users may find these buttons useful for less vital functions.) The thumb buttons themselves are compact and easy to differentiate, while the silicone grip beneath each one helped keep my fingers comfortable and in the proper place. The contoured scroll wheel also prevented slippage, without the potentially obnoxious ridged design of some of the Sensei 310's counterparts.

The silicone surfaces put the Sensei 310 a notch above its precursor without radically changing the design.

The Sensei 310 runs on the SteelSeries Engine 3 software, which is still one of the better programs out there for controlling gaming peripherals. Using the Engine, you can reprogram buttons, create individual game profiles, adjust the DPI, control the RGB lighting and more. It's not strictly necessary to use the software, but this program is not very resource-intensive, and it works just like it's supposed to.

My only real complaint is that SteelSeries (alone among major hardware companies) gives you only two DPI settings to play with, rather than up to five. Granted, there aren't many situations in which you need five separate DPI settings within a single game, but they're pretty helpful if you don't feel like creating individual profiles for each program you use.

You can also play with full RGB lighting for both the SteelSeries logo on the palm rest and the scroll wheel. It's hardly a make-or-break feature, but you can sync it with other SteelSeries peripheral lighting, which is a nice touch. For some reason, the default red-blue-green pattern isn't available as a preset, so you'll either need to remake it yourself or completely reset a profile if you want the default back.

While I've mentioned already that the Sensei 310 is ambidextrous, I'd be remiss if I didn't bring it up again as a distinct feature. Lefties get few enough mice as it is, and ambidextrous mice often split the difference and wind up being uncomfortable for both dextral and sinistral players. The Sensei 310, on the other hand, is incredibly comfortable for either hand, especially thanks to the double silicone grips. At around 3.2 ounces, it's also light enough for use in esports, which may be enough to help lefties break into the burgeoning, demanding scene.

The Sensei 310 is an excellent mouse in every genre I tried. For esports titles, like Overwatch and Heroes of the Storm, it responded to my movements quickly and accurately. I could turn the DPI down to make my aim more accurate as Doomfist or program my favorite skills to the thumb buttons while taking down enemy strongholds.

Single-player titles are also the Sensei 310's natural home. Whether I was summoning legions of the undead as a Necromancer in Diablo III or frightening criminals into submission in Telltale's Batman, the mouse was customizable, colorful and quick.

The Sensei 310 is an impressive upgrade for a mouse that had little room to improve as it was. Not only does the mouse excel in-game; it's also attractive, comfortable and a good $30 cheaper than its predecessor. If you're in the market for ambidextrous mice, the Razer Lancehead ($80) and Roccat Kova ($50) are also worth checking out. I don't have a strong favorite among the three, but I do know that righties and lefties alike should be perfectly happy with any one of them.