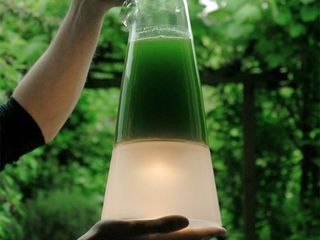 While we run the risk of writing too much about photosynthesis, this plant-powered lamp was simply too good pass on. The Latro by Eindhoven-based designer Mark Thompson is a hanging lamp that draws energy from algae. Extremely tiny (on the nanometer scale) electrodes are inserted directly into algae's cells, right into the chloroplasts.

As the chloroplasts, the cellular organs responsible for photosynthesis, work their magic, the electrodes pull a small electric current and directs it to the lamp's battery. Thus the Latro is meant for mounting in outdoor spaces, or at least in areas where it's exposed to generous sunlight. The lamp's two spouts also let the owner refill the water and blow into to provide carbon dioxide, and allow oxygen to escape as a by-product of photosynthesis.

Much like solar energy, it's ironic that Latro needs sustained access to light to generate its own. But as lighting goes, Thompson's creation is packaged as a pretty eco-friendly solution. Other than the materials used in the lamp's construction, the water and algae used in Latro are plentiful in supply—and don't become garbage when thrown away.

Now if only Mike Thompson gets down to actually selling Latro to the market.