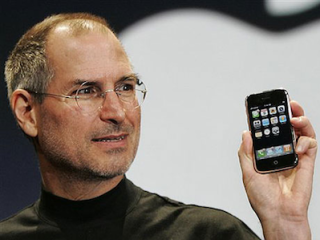 When Apple announced last week that Steve Jobs had died, there were many questions. When did it happen? What was the cause of death? What will happen to Apple? Of all the questions being asked, it's unlikely that many were thinking about who would play him in the movie of his life. However, it has indeed become a prominent question following news that Sony Pictures is in the process of acquiring the movie rights to the upcoming Steve Jobs biography.

Penned by Walter Isaacson, the biography is based on more than 40 interviews with Steve Jobs and spans nearly 450 pages. Due out on October 24, the book has received heightened amounts of attention in the six days since Steve Jobs passed away from respiratory arrest caused by a pancreatic tumor. Late last week, when rumors began circulating that Sony was looking to acquire the rights to a movie based on the book, reports said the company was offering a cool one million dollars.

While we don't know who will play Steve Jobs in the movie (perhaps Noah Wyle will step back into the role?) CVG reports that Mark Gordon (Saving Private Ryan, The Day After Tomorrow, Source Code) will produce the film for Sony, so we know there's already some talent behind this production. Any suggestions on who should be silver-screen Steve? Leave them in the comments below.