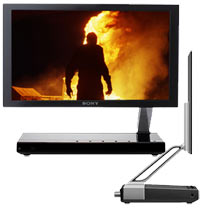 New York (NY) - Sony’s organic light-emitting diode (OLED) TV has been drawing a lot of attention, but at least according to one research firm Sony has been a little over-zealous with its claims.

The Sony XEL-1 was released earlier this year when it was unveiled at the Consumer Electronics Show. The $2500 TV is notable because it is the first in the US that uses OLED technology.

The infant technology allows manufacturers to make TVs that have a super-bright picture and slim form factor, and uses significantly less power.

Sony claims that the XEL-1 maintains its brightness for 10 years, or around 30,000 hours. However, DisplaySearch tested out two units and found that they would lose half their brightness in just 17,000 hours of use.

"The results demonstrate that the Sony display is significantly inferior in many ways to the current designs," said researchers at DisplaySearch. The firm also added that low longevity is one of the big problems with OLED technology.

Sony said it continues to stand by its claims, which are made from its own internal testing.