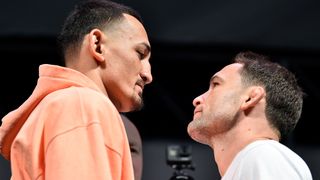 Tonight — in mere moments — UFC 240 kicks off from Rogers Place in Edmonton, Alberta, Canada. The event will start at 6:30 p.m. ET, and we don't blame you if you're still trying to figure out how to live stream UFC 240 and see Holloway vs. Edgar.

That's because UFC 240 is spread across multiple channels, and you’ll also need a subscription to UFC’s streaming service.

Tonight starts at UFC Fight Pass (which starts at $9.99 per month, with a 7-day free trial) at 6:30 p.m. ET to watch three “Early Prelims” fights. Then, move over to ESPN to watch four Preliminary Card bouts, then head over to PPV, ESPN+, or UFC Fight Pass to watch the remaining five fights, headlined by Holloway and Edgar and Cyborg vs Spencer.

If you're traveling outside the country during UFC 240, you'll still be able to watch it. A virtual private network, or VPN, can help you connect to your desired streaming service through a U.S. server and watch the draft as if you were at home.

Here are three VPN options worth considering, should you need them during UFC 240.

How can I watch UFC 240 with a cable or satellite subscription?

If your goal is to watch the entire UFC 240 event with a cable or satellite subscription, you won’t get your wish.

UFC 240 will start on UFC’s Fight Pass streaming service. You’ll need to be a subscriber to watch it there. After that, you can turn to your cable or satellite subscription and watch the preliminary round is on ESPN. Chances are, you have ESPN, so you should be good there.

The main card is on UFC Fight Pass, as well. But you can also watch it on ESPN+, a paid service that costs $50 per year. You’ll also need to pay $60 for the pay-per-view. However, ESPN is offering a deal on UFC 240, so you can get both a subscription and the PPV for $80.

How can I live stream UFC 240 without a cable or satellite subscription?

Even if you have a cable or satellite subscription, streaming might be your best option.

For the first fights, you’ll need to tune in from UFC’s Fight Pass. With Fight Pass, you can pay $10 per month to access the company’s live-streaming fights, as well as an archive of bouts from previous events. It’s available on just about any device, including your smartphone, browser, or set-top box.

To watch the prelims, you’ll need to go over to ESPN. Several streaming services offer ESPN. Here’s a rundown:

Hulu + Live TV: Hulu's Live TV package will set you back $45 per month for 60 channels, including ESPN. Best of all, you can record up to 50 hours of programming to Hulu's cloud DVR.View Deal

Playstation Vue: With a $45-a-month PlayStation Vue subscription, you can stream ESPN through the service's Access tier, which is the higher-level package from PlayStation.View Deal

SlingTV: Sling doesn't include local channels, but that's not a concern if you're interested in UFC 239. Its Blue tier includes ESPN, which is all you'll need to watch the draft. A current promotion is knocking 40% off the normal $25 monthly rate, so you'd just pay $15 for SlingTV.View Deal

YouTube TV: The $50-a-month YouTube TV has more than 70 channels that make it easy to watch the programming you want, including ESPN. YouTube TV also features unlimited cloud DVR storage, so you can watch the tournament at a later date.View Deal

Once it’s time to watch the main event card, it’s back to UFC Fight Pass you go. If you’re not much of a fan of the app, however, you can also choose to watch the fights on ESPN+, which costs $5 per month or $50 per year.

Not surprisingly, ESPN+ is available on several devices, including the iPhone and Android-based devices. You can also stream the app on Roku, Chromecast, Kindle Fire, Apple TV, and several other streaming devices.