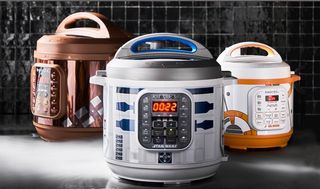 The Instant Pot Duo was already our top pick among the best Instant Pots, and thanks to Lucasfilm's merchandising arm, it now comes in a variety of Star Wars-themed colors.

The 3-quart Instant Pot Duo—good for individuals or couples—has a skin that makes it look like BB-8, and is available for $79.99.View Deal

The Instant Pot Duo looks like your favorite Wookiee, minus the hair, and its 8-quart capacity is large enough to fit a Baby Yoda.View Deal

Instant Pots, like all pressure cookers, have a sealed chamber, which lets you cook foods faster by increasing the air pressure. So, for example, you can make short ribs in less than an hour. However, Instant Pots have several other functions, such as making yogurt, steaming eggs, sterilizing bottles, and more.

During Black Friday, there are often lots of Instant Pot deals, so if you don't want a Star Wars-themed kitchen appliance (but really, who doesn't?), you can often get the Instant Pot for less. For example, the Instant Pot Duo (6-quart) is currently available for $79.99 on Amazon, a savings of $20.

However, we've seen the Instant Pot Duo drop to as low as $59, so if you're in the market, be on the lookout for even better Black Friday and Cyber Monday deals.

This is the 6-quart Instant Pot Duo, which is an ideal size for most people, as it's large enough to prepare food for several people. It has seven cooking functions (pressure cooker, slow cooker, rice cooker, steamer, sauté pan, yogurt maker and warmer), and 14 pre-set programs.View Deal