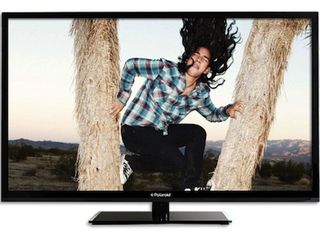 4K TV (also know as Ultra HD) TVs are way too expensive for most consumers, goes the common wisdom. And while that's probably still true, prices are dropping, as Polaroid announced today (Jan. 2) it would be debuting a 50-inch 4K LCD set for $999. Those who don't care about 4K (still a legitimate point of view), can get Polaroid's 50-inch 1080p LCD for $599. Both models have LED backlighting, which is becoming de riguer in the TV industry.

The pair will first go on display at the Consumer Electronic Show (CES) being held in Las Vegas from January 7 to 10.

According to Polaroid, the $599 model is "Roku Ready", with an MHL-enabled HDMI port to connect a Roku Streaming Stick that is bundled with the television. This gadget will allow access to Roku's 1,000 channels for streaming video, such as Netflix or Hulu Plus, without the need of a set-top box. (The MHL port is becoming more common, and many TV vendors are expected to announce Roku-ready models at CES.)

Why is a camera company making TVs? Well, Polaroid isn’t what it used to be. After two bankruptcies, and various breakups and reorganizations, it's essentially a budget consumer electronics company that flies the flag of a once-revered name. The 50GSR7100 (HD model) and 50GSR9000 (4K model) televisions are being manufactured by Empire Electronics Corp., a private circuit-board manufacturer.

According to Polaroid, the line of televisions will ultimately include models ranging from 32" to 69" screens - in both HD and 4K varieties.

This year's CES could be a make-or-break moment for 4K TVs. While the concept of more pixels is always appealing to consumers, drastically higher prices are not. Prices on 4K TVs have been dropping almost as soon as they come out. But there's still a long way to go — at least from the top-tier vendors like Sony or Samsung — before 4K TVs come close to affordable prices. Meanwhile, lesser-known companies such as Seiki are offering 4K models at radically lower prices. (Seiki's 50-inhc model is currently priced at $770 on Amazon, for example.)

If TV makers can bring prices low enough, and show that more content made specifically for 4K (as opposed to HD that is upscaled) is coming, the tech may stand a chance of catching on (albeit slowly) in the next two years.