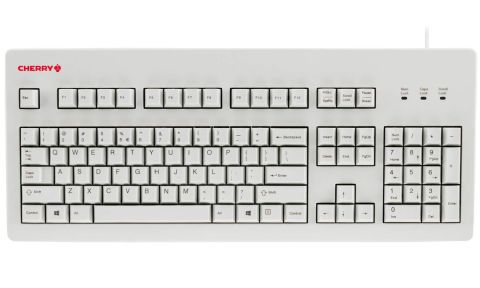 The Cherry MX Board Silent aims to reduce noise while offering comfortable, responsive keys, but you'll pay a lot for the privilege.

Cherry, a German electronics company, makes the best mechanical keyboard switches on the market; if you're a technophile, you probably know that. What you may not know, however, is that the company also sells its very own line of keyboards. The Cherry MX Board Silent ($150) employs a brand-new type of Cherry switch that aims to reduce noise without sacrificing a mechanical keyboard's signature comfort and responsiveness.

The MX Silent switch itself works exactly as advertised, and could prove to be a real boon in the workplace. On the other hand, the keyboard could have used just a few more bells and whistles, given its high asking price. Consider this one if your office manager can expense it.

The Cherry MX Board Silent is about as simple as keyboards get, making it appropriate for an office setting. The peripheral is 18.5 x 7.7 x 1.7 inches, which is pretty large for a device without any extra keys. On the other hand, you can get it with either a black or white chassis, and that's more than you can say for a lot of other keyboards.

The keyboard surface and keys are made of a pleasant, lightly textured matte material, and the only adornments are three small lights letting you know whether Num Lock, Caps Lock and Scroll Lock have been activated.

There are no media controls, either as discrete buttons or as keyboard shortcuts, and this seems like a big missed opportunity. While media controls aren't always the most elegant additions, they often come in handy in an office environment. I often found myself reaching for a volume dial to adjust my music while I worked, and instead had to start tampering with imprecise on-screen controls.

As the first keyboard to employ Cherry MX Silent switches, the MX Board Silent ultimately lives or dies on the quality of its key switches. First and foremost, the MX Silent keys, though not 100 percent silent, are indeed extremely quiet. I compared them against both a Logitech G810 Orion Spectrum keyboard (mechanical switches, somewhat like MX Cherry Browns) and a standard membrane office keyboard, and the MX Silent keys emit far less noise than either of the other two. You can hear keys being depressed, but there's no "click" sound; it's more of a soft tap. Touch typists will have to endure a little noise, but those who hunt and peck will probably not hear much at all.

The MX Board Silent comes in two flavors: MX Cherry Red Silent and MX Cherry Black Silent. Both are quiet mechanical switches, further enhanced with rubber domes within the keycaps to reduce the amount of noise. I reviewed the Black model but got some hands-on time with the Red as well. Having used other Red and Black peripherals, I can say that the feeling is almost identical, just with less sound produced.

For those who haven't used them before, both Cherry MX Red and Black switches are linear instead of tactile, meaning you will have to press the key all the way to the bottom, rather than clicking halfway, before your command registers. Blacks require 60 grams of force, whereas Reds require 45 grams. Both are comfortable and responsive, and Cherry MX is still the best in the business when it comes to delivering mechanical switches. If your office job requires typing all day and you haven't already invested in a mechanical keyboard, the MX Board Silent would be a strong entry point.

Although a mechanical keyboard is theoretically good for everything from gaming to editing videos, if you dish out $150 for a standard-layout Cherry peripheral with quiet keys, it's probably going to be for typing first and foremost. I put the MX Board Silent through its paces on TypingTest.com and was extremely pleased with the results.

The MX Board silent is comfortable to type on as well. I didn't notice any discomfort, even when typing out long reviews, like this one. My only complaint is that the two little legs that keep the keyboard propped up tend to collapse pretty easily if you push the keyboard back. As someone with a crowded desk who constantly needs to clear off space, this was an extra bit of frustration that most other keyboards have figured out a way to avoid.

The MX Board Silent is expensive for a keyboard that doesn't offer features such as media controls, extra keys or backlighting, but you may not need those things in an office environment. What you're really paying for are the quiet, comfortable switches and the elegant, unassuming design. I'm not sure those are worth quite as much as Cherry is asking for them, but the MX Board Silent knows exactly what it wants to be, and lives up to its promise.

If you need a keyboard for home and aren't averse to paying a bit more, consider the Logitech G810 ($160) or the Corsair K70 ($180), both of which offer similarly comfortable keys and much more versatility for only a little more money. You could also go the other route and get cheaper models, like the Logitech G610 Orion ($120) or the Corsair Strafe ($110), which aren't quite as fancy but still offer backlighting, media controls and mechanical keys. Otherwise, the MX Board Silent is a fine choice for the office — if you can stomach the price of admission.