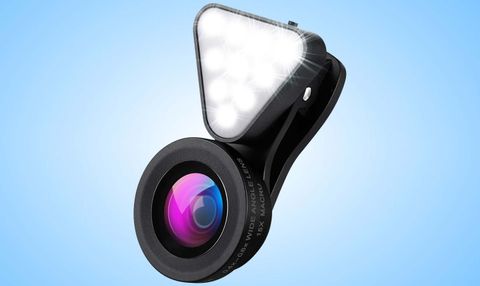 This Amir lens kit has a good macro lens, but it captures less-than-impressive wide-angle images. The integrated LED may add unwanted bulk, too.

The Amir Phone Camera Lens kit comes bundled with macro and wide-angle lenses; front and back lens caps; an integrated, rechargeable LED light; a USB cable; a clamp; a microfiber lens cloth; and a small pouch. But despite the useful add-ons and the macro lens' good performance, its wide-angle lens left us disappointed.

Although Amir's kit works with a variety of smartphone brands (including Samsung), we tested it on an iPhone 8. The lens clamp fit snugly on the device.

As with many of the lens kits we tested, the two lenses are mounted together on the clamp, with the wide-angle lens on top. Unlike Xenvo's LED light, Amir's LED is connected to the clamp itself, which makes it not only bulkier but less versatile.

The lenses were easy to mount and unmount from the clamp, and the front and back caps provided good protection for the glass when the lenses were not in use.

The wide-angle lens's 0.4x to 0.6x angle of view gave us plenty of room to compose landscapes. However, test shots were a little soft throughout the image, with increasing softness toward the outer edges and some vignetting at the corners.

If you're going to keep the images small for online posting, the less-than-impressive image quality won't be very evident. There was also a slight curvature of straight lines toward the outer edges, but this phenomenon is common with very-wide-angle lenses, even on DSLRs.

To access the macro lens, just unscrew the wide-angle lens. The 15x macro lens takes careful preparation because the depth of field (the portion of the image from near to far that is in focus) is extremely shallow, and the subject needs to be within 1 to 2 centimeters (0.4 to 0.8 inches) of the lens.

For the best results, use a tripod, because it's almost impossible to hold the phone steady enough to keep the lens-to-subject distant constant. Do that, and you'll be rewarded with incredibly sharp and detailed photos. One of our test shots shows the individual threads of the kit's fabric pouch in so much detail that you can see the warp and weft of the weave.

The triangular light that's attached to the lens clamp consists of 10 LEDs softened by a slightly frosted cover, although lighting can be a bit uneven depending on how the light is angled. Low, medium and high intensities are available, and at the most powerful setting, the light can illuminate objects up to about a foot or so.

Because the lenses can be used for both front and rear cameras, the LED is available for selfies, too. A small USB cable to charge the light is included; it takes about an hour to fully charge and provide power for about an hour's use.

At $17, the Amir Phone Camera Lens with LED light kit is very inexpensive, but the performance of its wide-angle lens was disappointing. If you don't need an LED, consider Aukey's Ora kit, which is just $2 more and produces much better photos. If you're looking for some extra light, another option is the Xenvo Pro kit, which costs twice as much but is more versatile and has better lenses.